Edward Mandell House was born July 26, 1858 in Houston, Texas. He became active in Texas politics and served as an advisor to President Woodrow Wilson, particularly in the area of foreign affairs. One of America's greatest diplomats, he served as Wilson's chief negotiator in Europe (1917-1919) and as chief deputy for Wilson at the Paris Peace Conference. His major achievements were participating in the drafting of Wilson's Fourteen Points and the Covenant of the League of Nations; and securing an armistice based on American ideals. He died on March 28, 1938 in New York City.  His diaries, consisting of nine volumes, are part of the Edward Mandell House Papers at Yale University Library. The diaries, contain typewritten transcripts of three separate documents prepared over a number of years under Colonel House's personal supervision. The diary provides a daily record of Colonel House's activities from 1912 to 1919, and less elaborate entries from 1920 to 1926. It was dictated almost daily to Frances Denton, House's private secretary, who accompanied him on all his trips abroad. The work is remarkable for its revelation of House's frank and personal assessments of the personalities and projects of the era. The "Memories" and "Reminiscences" provide autobiographical account of House's life, supplementing the diary. Also included in the series are logbooks kept from October 31, 1918 to June 29, 1919, which provide evidence of the number of individuals who visited House private office. 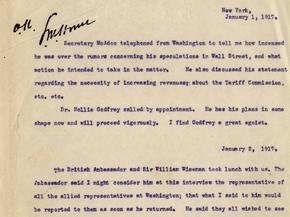