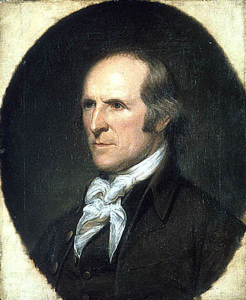 There is a vast trove of medical related collections in the Manuscripts and Archives of Yale University Library. I recently had a chance to go through some of these materials for an instruction session I co-taught for a class on the history of mental illness in America. One collection I examined was the Clements Collard Fry Papers. From 1930-1955, Fry was the head of the Department of Mental Hygiene at Yale, the office responsible for the treatment mental health problems among members of the Yale community in the early 20th century. In addition to his work with mental illness, Fry was an avid collector of historical medical documents, and the letter transcribed below is from that collection.

This letter is particularly fascinating for Pickering’s relation of Benjamin Rush’s opinion on masturbation. Rush thought that those who were most virtuous, especially young clergymen, were most susceptible to it, and he had warned his sons to avoid the vice. Pickering agreed with that assessment, reporting that his own sons died early because of their predisposition to onanism. He reported that the only cure for the “derangement” would be regular sex inside marriage or hard work. These types of views mirror the Federalist notion of control — it starts with the individual body and translates its way up to the body politic. This might be one reason why Pickering expressed curiosity about vegetarianism at the beginning of the letter. If people show restraint in their lives, either through eliminating meat or sexual urges from their lives, a republic based on virtue emerges. 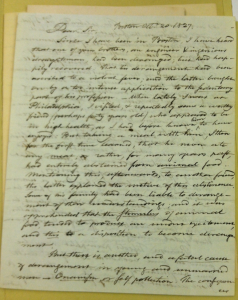 Since I have been in Boston, I have heard that one of your brothers, an engineer & ingenious draughtsman, had been deranged; but had happily recovered. That is derangement had been ascribed to a violent fever; and the latter brought on by a too intensive application to the Sedentary part of profession. When lately I was at Philadelphia, I visited & repeatedly saw a worthy friend (perhaps forty years old) who appeared to be in high health, as I had before known him to have enjoyed; But taking a meal with him, I then for the first time learned, that he never ate any meat; or rather, for many years past, had entirely abstained from animal food.  Mentioning this, afterwards, to another friend, the latter explained the motive of this abstinence. Some of his family had been liable to derangement of their understandings; and it was apprehended that the Stimulus of animal food, tended to produce an undue excitement, and this a disposition to become derangement.

But there is another, and a fatal cause of derangement in young and unmarried men – Onanism, or self pollution. The consequences [2] are not suspected. The celebrated Dr. Tissot wrote largely on the Subject; and described those consequences, the result of his experiences. consequences really most afflictive. epilebsy [sic], consumption, and the most dreadful of all, Derangement of the understanding. I have at different times conversed with some distinguished physicians, on this Subject – among them, with Dr. Rush.  Many years ago he mentioned the matter to me; and the numerous applications to him, for medical relief; some from young clergymen; the most virtuous [inserted: being] the most liable to that selfish indulgence, which I remember he called “a monkish practice.”  He added, that t[e]aring off the names of the writers, he used to give the letters to his Sons, a warning to abstain from that vice. I have become more conversant with the Subject, because the derangement, and early deaths, of my Sons William & George, arose from that fatal indulgence. 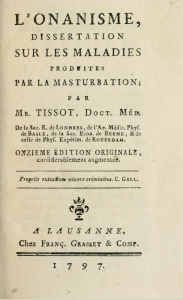 Perhaps Tissot’s pamphlet may be found at some bookstore – or if not, with some physician of your acquaintance. A short account you may find the Encyclopedia [3] Britannica.

I do not know your brother; but tis enough to have known you, to determine me to give to you the hints herein noticed; being with respect and affection yours.

I always ascribed Mr. Bushminter’s epilepsy, and premature death to the cause above suggested.  My only brother lived to a considerable age: but his epileptic fits, for 20 or 30 years, I never doubted, originated in the Same cause. A young man in New Hampshire, grandson of my brother Wingate, was a physician. He was subject to epilepsy. By accident, he met with a woman whom he married. During her life, for 2, 3 or 4 years, he was well. After her death, the fits returned: and he has now quitted the practice of medicine, and gone to work on his father’s farm; which has proved salutary.