Coalition for People and the West Rock Youth Leadership Program 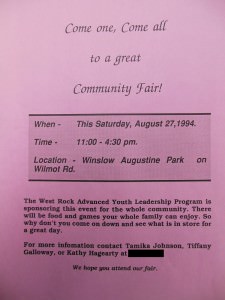 Manuscripts and Archives recently completed work on a collection of records created by the Greater New Haven Coalition for People (MS 2007). The Greater New Haven Coalition for People was founded in 1981 as an umbrella group of different community agencies and organizations that were concerned about the effect of budget cuts on programs here in the city of New Haven, Connecticut. Soon it evolved into a grassroots organization that focused on organizing and addressing a variety of issues that impacted the low and middle income residents of the city. Some important issues to the group include conditions and safety of public housing, health care and low-cost prescription medication availability for low-income patients, especially those who are uninsured, public transit safety and availability, and programs for children and adolescents.

In 1994, Coalition for People focused heavily on the last item. As they often did fundraising and work with other community organizations, they were included in a Request for Proposals for advanced youth leadership training programs by the Community Foundation for Greater New Haven. The Community Foundation had been developing these programs with groups like the Coalition for People for the past two years and wished to provide funding and direction for another year. The focus of the 1994 programs was on younger adolescents in the Fair Haven and West Rock neighborhoods. The core curriculum was focused on such things as “Communication (Individual/Group), Planning and Problem Solving, Cognitive/Academic Support, Conflict Resolution/Mediation, and Diversity/Cultural Awareness.” Other aspects of the program included placing participants with mentors, a neighborhood event planned by the participants and special recreation trips.

In this document from a March 16th meeting, you can see the Coalition brainstorming many aspects of the Leadership Program, including possible community events, recreation, placements for participants, and what they expected from the staff they hired for the program. This draft of the program’s schedule gives you an idea of what they were planning for the adolescents.

The program was just as much an opportunity for parent involvement as for involvement by the teenagers. Coalition for People regularly sent updates to parents, asking for their help with events and initiatives by the program.

For the mentorship aspect of the program, the Coalition worked hard to get a large variety of businesses to participate, as can be seen from this list of prospective mentors. Part of the program was planning a community event for the neighborhood. The members of the program chose to host a community fair, with games, food, and tables with representatives from different groups that could provide resources for the community. The adolescents in the program sent out this letter to groups to ask for help. The Community Fair came together on August 27, 1994. By then, the 20 teenagers who participated had gotten a chance to observe, ask questions, and work with role models, take classes, and enjoy day trips that could be as simple as going to the local water park to trips to other cities to see what their museums offered. It is clear that the Coalition had worked hard to help these teenagers. It is equally clear that these teens had a lot to offer. Researchers wishing to work with the Greater New Haven Coalition for People Records can view the finding aid here. Researchers can also visit our website for more information on visiting Manuscripts and Archives and using our collections.