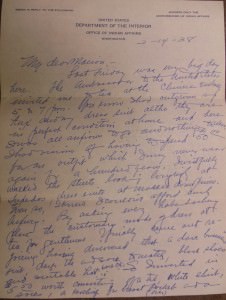 Thanks to the generosity of donor Ravi D. Goel (Yale College, 1993), Manuscripts and Archives has received a collection created by Henry Roe Cloud, the first self-identified Native American to graduate Yale University.

Henry Roe Cloud was born on a Winnebago reservation in Nebraska in the mid-1880s. Like many Native American children born on reservations in that time period, Cloud went to an Indian school to learn how to read and write in English as well as a trade. Cloud was an exceptional student, moving on to a private boarding school in Massachusetts before starting Yale College in 1906. While at Yale, he was adopted by the Roe family, missionaries that spent some of their time preaching among Native Americans. He received his bachelors in psychology and philosophy in 1910 and his masters in anthropology in 1914. He became a Presbyterian minister, an official within the Office of Indian Affairs, and a lifelong advocate of modern education for Native American youth.

Manuscripts and Archives already holds a collection with some of Cloud’s letters in the Roe Family Papers (MS 774). However, with this new collection, we received more correspondence, including a set of letters addressed to Cloud’s daughter, Marion Roe Cloud Hughes.

The letters were written when Cloud was traveling on behalf of the Office of Indian Affairs. One letter in particular stood out to me because of its familiarity of situation to most: being stuck at a fancy party, unsure what to do.

That’s not to say that Cloud was particularly shy. At Yale he was part of a fraternity (Beta Theta Pi), the debate club, and the Elihu Club. He also regularly talked to people in the course of his work. However, it must have been daunting to be invited to tea with the ambassador to the United States at the Chinese embassy. While Cloud and the ambassador were classmates at Yale together, this was still a far more formal event than Cloud was used to.

Getting to the tea was the first difficulty as neither Cloud nor the taxi driver had change for Cloud’s five dollar bill. Cloud wound up having to ask around the embassy for change before giving the driver $3.00 for a 50 cent fare. When he finally entered the embassy and was received by the ambassador and one of his daughters, Cloud was not quite pleased when the ambassador commented on “how stout” Cloud was and asking what Cloud ate. Embarrassed, Cloud found himself moving on and then lost amongst the 400 or so guests.

Cloud did find a solution to feeling lost. He took refuge at a nearby table with cocktails. After imbibing a bit, he then found his courage to try to find the Chinese ambassador’s other daughters. His purpose, he explained to Marion, was to show the ambassador’s daughters a picture of her and her three sisters so as to have occasion to speak with them further:

“I even went so far as to vie with other ambassadors for the Central and South America republics by saying I was representing the North American Indians! At this the Embassy cohorts lifted eyebrows as much as to convey the thought to me—‘Yes, I duly feel your importance.’ To one I said, ‘I am anxious to meet the other daughters of the Ambassador’…Soon I was face to face with the daughter and I pulled out your picture with your sisters.”

The daughter wrote her sisters’ names on the envelope of the picture for Marion and her sisters at Cloud’s request, but otherwise did not seem interested in Cloud’s photograph. Thankfully, he discovered food nearby and wound up in the company of another Chinese citizen who split a taxi with him home from the tea—Cloud would have walked home otherwise, “even if it took me till midnight.”

While the party probably didn’t go as Cloud would have liked, at least he had an adventure to relate to Marion. We now also have the letter so we can share in it as well. The first page of Henry Roe Cloud’s letter to his daughter Marion.

Researchers interested in seeing the Ravi D. Goel Collection on Henry Roe Cloud (MS 2008) can now do so via the finding aid located here. To learn more about using Manuscripts and Archives collections, you can visit our website here.