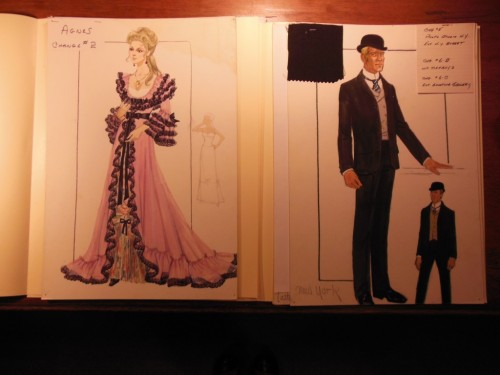 The George Roy Hill Collection serves as both an examination of the creative as well as the physical labor that went into making feature films. Hill, who directed work such as The World According to Garp and Slaughterhouse-Five, was a student at Yale College (Class of 1943), and opted to give his collection to Yale University because both he and Paul Newman were affiliated with Yale. His best known film, however, is probably Butch Cassidy and the Sundance Kid, starring Paul Newman, Robert Redford, and Katherine Ross

Butch Cassidy and the Sundance Kid, which was the top grossing movie of 1969 and went on to win several Academy awards, received critical praise. It features the character who became the namesake for the Sundance Film Festival, which was started by Robert Redford.

Examining the material in this collection shows the tremendous physical, creative, and emotional labor that went into creating a feature film. The costume and set designs, along with the reproduction of some of the few photographs existing of the real Butch Cassidy and the Sundance Kid, show the detail and the dedication of the designers. The creative process was tracked through the scene breakdowns and storyboards, where stunts and critical scenes were carefully planned, shot by shot. These breakdowns are hand drawn and look like animation storyboards. These shots also required a great deal of technical skill. Hill speaks in an interview about the methods they used to capture particularly important moments–such as the last scene of the film, which is a freeze-frame–and his thought process that spoke to the legend of Butch Cassidy and the Sundance Kid returning in this final moment right before they died. Storyboard for the film, Butch Cassidy and the Sundance Kid. Box 24

The creative team worked hard on the style and flair of the film; this translated into an iconic film, with iconic moments that linger in cinema history. But looking into the collection shows that this movie and its legacy was not easily won. George Roy Hill, the director, seemed to be in constant conflict with William Goldman, the screenwriter. He treated Goldman’s concerns about changing the script lightly and regarded his notes as funny but inconsequential. Hill wrote to Goldman, in a letter dated May 7, 1969:

You will be happy to know that during the last going through the movie for corrections, I read your notes to the editors and your letter and at the moments, our notes are getting more laughs than the movie. We are doing nothing with them, but it provides us with general merriment in our travail.

If you feel any reluctance about fulfilling the above request I am sure that a recollection of what comes when I’m left to my own devices will spur you to the needed effort. [Box 1, Folder 5]

Goldman, in reply, wrote a letter dated May 12, 1969. He seemed particularly incensed at the notion that any changes to the script were made without his consent, and compared the request from actors for additional material to clarify intent to asking Shakespeare to allow the actor playing Ophelia to suggest Hamlet ad-lib that “maybe I should kill myself” in the middle of Hamlet’s famous ‘To be, or not to be’ soliloquy. He charged Hill with protecting his work, stating:

I have no idea what the fucking actors actually said since the script girl was a microcephalic and the director less than lax when it came to PROTECTING MY FUCKING DIALOG [Box 1, Folder 5]

In fact, these two argued about almost everything in the movie, including hiring Burt Bacharach to do the score – the point where Hill hired him without consent, in the middle of an argument with Goldman. None of this, however, detracted from good art. Goldman, for his part, won an Academy award for the script, and Bacharach won an Academy award for the song Raindrops Are Falling on My Head, written for this film. So in this regard, whether the conflict was as volatile as Goldman’s letters suggest or as mild as Hill’s, the dedication of the designers, the screenwriter, and the director resulted in a film whose legacy includes being on several lists of the best films and screenplays of the first hundred years of cinema.