Waging War(s): Formation of the AIDS Committee of Toronto 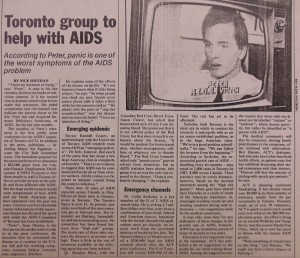 Doctors in New York and California have diagnosed among homosexual men 41 cases of a rare and often rapidly fatal form of cancer. Eight of the victims died less than 24 months after the diagnosis was made

By July 1981, 41 men received diagnoses of Kaposi sarcoma, a cancer that was endemic to parts of Africa and the Mediterranean region and rarely seen elsewhere. When it did occur in the United States, it was generally seen in men of Mediterranean, Eastern European, and Middle Eastern descent above the age of 50 and often took ten years for it to result in death if left untreated. However, the Kaposi sarcoma cases first seen in 1981 struck men in their 30s and they died within three years in many cases.

Further testing of the men showed that something had gone horribly wrong with their immune system. Their T-cells were nearly or outright non-existent. Other diseases were also showing up that most adults with a healthy immune system would never develop, such as thrush and Pneumocystis carinii pneumonia. These men died of the latter as well. The only real link that was found was that the majority of the infected were homosexual men and had many sexual partners. A few men were also intravenous drug users. Hemophiliacs also suffered these problems on occasion. After years of confusion and research performed by scientists in countries such as the United States and France, this destruction of the immune system was named Acquired Immunodeficiency Syndrome (AIDS) and its vector was determined to be a virus, Human Immunodeficiency Virus (HIV). Scientists discovered that HIV was passed through contact with certain infected body fluids, such as blood and semen, while saliva and sweat carried so little viral load and would not transmit the virus. Eventually, antiretroviral treatments were developed to slow the loss of T-cells and decrease the patient’s viral load, allowing them to live longer lives.

At the very beginning of the epidemic, there was a lot of fear and confusion across the United States. Gay people were blamed for infecting others and press coverage was homophobic in tone. Those with AIDS and their advocates fought back against government inattention to the crisis. Homosexuals and drug users were perceived as immoral by many, responsible for their own suffering and unworthy of assistance. Much has been written on this time period, including the nonfiction works And the Band Played On by Randy Shilts and Close to the Knives by David Wojnarowicz (whose papers are part of New York University’s Downtown Collection) as well as the plays Angels in America by Tony Kushner and The Normal Heart by Larry Kramer. An example of the atmosphere of discrimination against the gay men and lesbian communities. From the Gay Community News, June 26, 1982. (Box 6, folder 2)

While many of the first reports of AIDS were coming out of the United States, Canada also began recording statistics of people falling ill with the syndrome. Bert Hansen, an American professor of the history of science and medicine then teaching at the University of Toronto, was among those concerned about the growing epidemic in 1982. His and others efforts to help AIDS patients through the founding of the AIDS Committee of Toronto (ACT) is documented in the Bert Hansen Papers (MS 2042). A newspaper article announcing the start of the AIDS Committee of Toronto. (Box 2, folder 6)

ACT had its roots in an April 5, 1983 meeting held at the Church Street Community Center, run by Gays in Health Care and the Hassle Free Clinic in Toronto. On April 26, 1983, volunteers formed five different groups to begin work on several fronts: the Medical Liaison Committee, the Media Relations Committee, Fundraising and Special Events Committee, AIDSupport, and the Community Education Committee.

Hansen chaired ACT from 1983 to 1984. During his time, the five working group began projects that set the course for ACT. The Medical Liaison Committee contacted medical professionals for more information about patients with AIDS and to give them information as well. They also worked with the medical profession towards inclusive policies and support for people with AIDS. The Media Relations Committee spoke to reporters on behalf of ACT, held press conferences, and produced press releases. They also monitored the media for coverage of the epidemic, especially of the gay community; circulated articles that were positive and informative to others; and responded to press that was discriminating and bigoted in nature. Their intent was to make sure people were properly informed about AIDS rather than solely receiving news reports that were panicked, sensationalist, and exploitative of patients with AIDS and their loved ones. The Fundraising and Special Events Committee held events to raise funds for research into the disease and for day to day office costs of the committee. Most of ACT’s fundraising for research was in conjunction with other organizations, but they did organize smaller events in the Toronto area for ACT. AIDSupport sought to set up counseling and advising for AIDS patients as well as helping with practical needs, such as providing meals, transporting those who were unable to do so themselves, and running social activities for people with HIV and AIDS. The Community Education Committee was responsible for producing pamphlets and holding talks and workshops about how AIDS affected the body and how it may be spread. (During Hansen’s time with ACT, it was still not known what the exact vector was for AIDS, or even certain what bodily fluids transmitted the syndrome.) They modeled their services after the Gay Men’s Health Crisis (GMHC) located in the United States, after hearing about their work. To get a clearer sense of GMHC’s work, a committee member visited their offices to observe and make a report of their operations. The report on the activities of the Gay Men’s Health Crisis (GMHC) offices and operations. (Box 1, Folder 5) Bert Hansen stepped down from ACT in 1984 and returned to the United States in 1985. He continued to keep track of the media response to HIV/AIDS, which is also documented in the collection’s subject files. ACT continues to serve the Toronto community of those who are HIV positive, and providing community education on the disease itself and the stigma around those who have it.

Researchers wishing to work with the Bert Hansen Papers can view the finding aid here. Researchers can also visit our website for more information on visiting Manuscripts and Archives and using our collections.