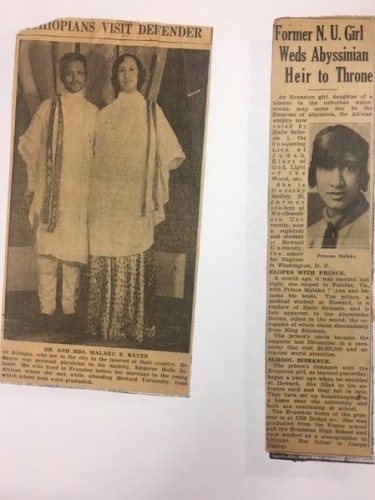 The following post was written by Camila Tessler, Archivist, Manuscripts and Archives. In 1931, Dorothy Hadley of Evanston, Illinois, married Prince Malaku Bayen of Ethiopia, Nephew of Haile Selassie I. Malaku Bayen was studying to be a doctor at Howard University, and upon the completion of his degree, he returned with Dorothy Hadley Bayen and their son Chip to Ethiopia.

Dorothy’s work was not just of a housewife and a mother, but also as an activist for the Ethiopian and black communities, both abroad and locally. During various times in her life she acted as a fundraiser for the Haile Selassie Fund, working in New York to raise money both from the black and white community. In one letter, she stated that she could easily raise funds in the black community, while the white community was never very generous, leading her to conclude that the natural home for black Americans would be Africa, and that Ethiopia held the future of the unity and the redemption of black people. Dino Robinson has written an article about Bayen, summarizing her work for the Ethiopian community and the movement that became the Rastifarian religion here. The Dorothy Hadley Bayen Papers at Manuscripts and Archives do cover this facet of her life, but they also demonstrate some of the culture shock and cover the adaptation of a woman who grew up in the Midwest to a life in Ethiopia. In several letters, she chronicles everything from the purchase of furniture (expensive in Ethiopia, but of good quality) and the personalities of her servants (from good to bad to drunkards) to life as a newly minted member of what was the oldest royal dynasty on the planet.

Her letters paint a very vivid and detailed picture of life in Ethiopia in the 30s, but the most refreshing part of her letters is her bubbling personality. She chides to Toots and Sam, in a letter dated December 27th 1935, “Why don’t you all write to me and let me know if you are living or dead?” In another letter, this one to her family, she admits that either she, or someone in their family, named her husband’s human skeleton (presumably for anatomy) Mussolini, and laments that her husband bought two rugs that they will be paying off “for twenty years hence!”

What her letters also give us is an outsider-insider view of the Ethiopian Empire. As a member of the royal family, Bayen had access into a place where most people did not, but as an American, she also had a perspective that allowed her to wonder, question, and describe customs and practices that she was not familiar with. She describes meeting the Emperor Haile Selassie:

There are two palaces, or as they are called “gibbee”, the upper, and the lower. The lower is the old palace that was Menelik’s and the new one is that built I think around 1930 when this present ruler was made emperor. It is in the new one that they receive all the important foreign visitors. It is a large two-story gray stone building inside a very huge compound, and there are soldiers and guards standing all around. Her Majesty and Sahai (her daughter) met us in a room furnished with gold and brocaded furniture, Louis XIV style (I think) […] I felt foolish bowing and backing out and so forth, seein’ as I have had so little practice in this sort of thing, and every minute I was afraid I would get my feet all tangled in my long skirt and go sprawling out on the floor. Wouldn’t that have been something? (Dorothy Hadley Bayen to her family, page 2, 2 October 1935. MS 1570, Box 1, Folder 1.)

Through her correspondence with her family in the Evanston, we get a good picture of a person in an extraordinary situation, and a witness to the beginnings of a movement that formed the basis of a new religion. But we also are given the perspective of an outsider to a new culture, a new life, and a new way of thinking.

See the online finding aid for the Dorothy Hadley Bayen Papers in Manuscripts and Archives for additional information about this collection.