The New Gates Classroom in Manuscripts and Archives 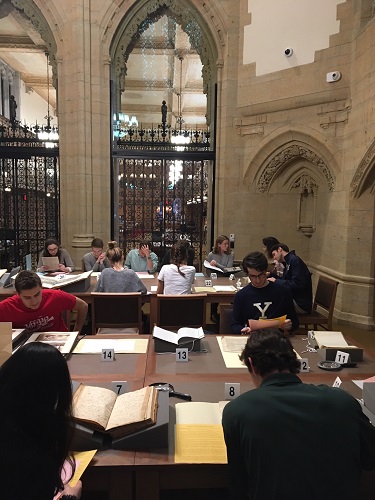 It has been seven months since our move back into our beautifully renovated public service spaces in the Wall Street wing of Sterling Memorial Library. We’ve had a semester and a summer of Yale students and other researchers back in full force, enjoying the modernized lighting, comfortable and functional furniture, state-of-the-art climate control, and the relative quiet that has resulted from relocating all staff not primarily responsible for public service operations out of the reading room area. The renovation has been deemed an unqualified success by both researchers and staff members! The most spectacular feature of the renovation, both visually and programmatically, is the conversion of the former Grand Exhibition Room at the back of the Manuscripts and Archives reading room into the Gates classroom. The new classroom is named for the late Stephen F. Gates (Class of 1968), whose generosity made the transformation possible. With a new entrance from the back of the Linonia and Brothers (L&B) reading room, the classroom space is separated from the reading room by Samuel Yellin’s dramatically ornate, wrought-iron gates, soundproofed by the insertion of glass in the arches. The Yellin gates bear the phrase There is no past so long as books shall live. This excerpt, from the poem “The Souls of Books” by the 19th century English poet Edward Bulwer-Lytton, Lord Lytton, is a fitting tribute to the room’s original purpose. From the opening of Sterling Memorial Library in 1931 until the move of Yale’s rare book collection to the newly constructed Beinecke Rare Book and Manuscript Library in 1963, the Grand Exhibition Room, in what was then the Rare Book Room, showcased Yale’s copy of the Gutenberg Bible, given to Yale by Mrs. Mary Harkness in 1926 shortly before Sterling Memorial Library opened. Right-hand gate in Manuscripts and Archives, looking from the reading room into the Gates classroom.

The entire section of Bulwer-Lytton’s poem from which the inscription on the Yellin gates is taken reads (from Dramas and Poems of Edward Bulwer Lytton (Little Brown and Company, 1898), pages 321-325):

All books grow homilies by time; they are / Temples, at once, and Landmarks. In them, we / Who but for them, upon that inch of ground / We call “The Present,” from the cell could see / No daylight trembling on the dungeon bar; / Turn, as we list, the globe’s great axle round, / Traverse all space, and number every star, / And feel the Near less household than the Far! / There is no Past, so long as Books shall live! / A disinterred Pompeii wakes again / For him who seeks yon well; lost cities give / Up their untarnished wonders, and the reign / Of Jove revives and Saturn : — At our will / Rise dome and tower on Delphi’s sacred hill; / Bloom Cimon’s trees in Academe; — along / Leucadia’s headland, sighs the Lesbian’s song; / With AEgypt’s Queen once more we sail the Nile, / And learn how worlds are bartered for a smile; — / Rise up, ye walls, with gardens blooming o’er, / Ope but that page — lo, Babylon once more! Left-hand gate in Manuscripts and Archives looking from the Gates classroom into the reading room.

The Yellin gates and their classics-themed ode to the power of books now watch over Yale students and other researchers, in both the Manuscripts and Archives reading room and the Gates classroom. Researchers and students pour through archival records, primarily, rather than books. These records–documenting the endeavors of Yale, its alumni and faculty, and outside organizations that often have some link to Yale–transport their readers in ways similar to the books in Bulwer-Lytton’s ode. The gist of the poem remains as true as ever.. One Yale course, Professor Jay Gitlin’s history seminar Yale and America, is an extremely popular class whose students plumb the depths of the collections in Manuscripts and Archives to write substantive research papers on topics relating to Yale history. The class session held in the Gates classroom introduced Spring term 2018’s participants to the wide variety of potential sources for their research projects. The Fall 2016 issue of the student-edited, student-produced Yale Historical Review was dedicated to research produced in a class that has become a right of passage for many Yale students from across the disciplines. We’re happy, as we think Stephen F. Gates would be, that Manuscripts and Archives and Sterling Memorial Library now offers a soaring, inspiring space in which a part of that right of passage can occur.