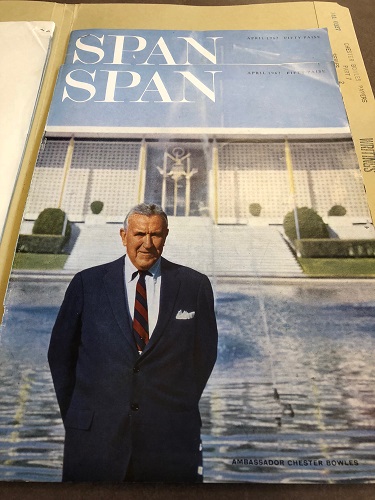 This is a guest post by Marc A. Reyes, a doctoral student in the Department of History at the University of Connecticut in Storrs. His research interests include foreign relations history, economic and political development, South Asian studies, and histories of science and technology. He is spending 2019 in New Delhi, India, as a Fulbright-Nehru Fellow conducting dissertation research.

“I continue to feel that the Vietnam situation, to put it mildly, is a dead-end street…” In 1968, Ambassador Chester Bowles finally expressed what he had been thinking for years: the Vietnam War would not end well for the United States. In an April 2, 1968, letter to former aide and future U.S. Ambassador to India Richard Celeste, Bowles asserted that the war had cost the U.S. dearly. Two days earlier, President Lyndon Johnson’s announcement that the United States would halt its bombing campaign to start negotiations to end the war had stunned everyone, and Bowles confided to Celeste that such talks would be “extremely difficult.” The U.S.’s options were not likely to produce a favorable outcome. Like many Americans, Bowles had serious concerns about the war, but initially he sincerely believed the war would produce a stable government for South Vietnamese citizens and eventually a more just South Vietnamese society. Now Bowles concluded the war was “a dead-end street.”

Chester Bowles would readily admit he was the Ambassador to India, not Southeast Asia, but his second stint as the U.S.’s Ambassador to India, from July 1963 to April 1969, allowed him a greater opportunity to better understand India and its evolving role in a wider range of Asian affairs. His first term, in the Truman administration, had been only for eighteen months and focused primarily on obtaining U.S. economic aid for India. Given the chance to return to New Delhi, Bowles threw himself into all matters of U.S.-Indian relations, and worked to understand one of the larger issues facing Asia during this period: the Vietnam War. Bowles thought deeply about the war and how it affected U.S. foreign policy in Cold War Asia.

Reading through the Chester Bowles Papers at Manuscript and Archives, researchers discover how much Vietnam weighed on Bowles. His personal papers provide glimpses into his thinking about nationalism, Third World revolution, and the balance of power in Asia. When he was not working on US-Indian issues, such as food aid to India and negotiating a settlement between India and Pakistan over Kashmir, Bowles analyzed India’s role in Asian affairs. He believed India could lead a coalition of non-Communist Asian nations, serving as a bulwark against the expansion and influence of China. Bowles specifically argued that India itself had seen up close the threat of Communist aggression (in its 1962 war with China) and the fight in Vietnam was another example of a non-Communist country resisting Communist domination.

Bowles’ Vietnam War concerns did not appear out of nowhere and steadily grew during the course of his second stint as ambassador. His papers document his disillusionment with the U.S.’s campaigns to repel North Vietnam forces and their South Vietnamese sympathizers and to build up a functioning South Vietnam. Mirroring a process similar to that experienced by many Americans, Bowles went from supporter to critic of the war, speculating what the war was costing the U.S. and what a post-Vietnam War world should look like for India, Asia, and the United States. As early as 1964, before the United States’ Rolling Thunder campaign and massive deployment of American troops, Bowles doubted that Vietnam could be resolved through purely military means. In a February 1964 letter to New York Times reporter James Reston, Bowles claimed that since his visit to Southeast Asia in 1952, “it was evident that the military approach would never work unless it was supported by a sensitive political effort to deal with the people.” Bowles lamented that since 1950 the U.S. had spent an “unbelievable” $6 billion dollars in Southeast Asia and had little to show for it. He recognized history repeating itself in that the Republic of China’s leadership, before its defeat by Mao Zedong’s Communist Army, had also believed a military victory had to precede any political and state-building reforms. Bowles recognized that these breakthroughs had to be connected, and were not separate issues to be dealt with in the future. Bowles’ reference to earlier mistakes was not a one-time occurrence, either. In a 1966 letter to Senator George McGovern, Bowles said the U.S. had failed when it allowed the French to resume control of their Southeast Asia colonies, and speculated that if FDR had lived to see the end of the war he would have challenged France’s colonial rule.

Hoping to receive some kind of Indian support for the U.S.’s war effort in Vietnam, Bowles traveled to Thailand, Laos, and South Vietnam in August 1966. While there, he met with government leaders, ambassadors, and military commanders to learn more about the U.S.’s Vietnam mission. If Bowles, a trusted voice to Indian leadership, witnessed and reported back signs of U.S. progress, perhaps India could offer moral support for the U.S. mission or at least refrain from criticizing the war. During his week-long visit, Bowles heard of South Vietnamese villages pacified, of schools built, and markets reopened. It was apparent, however, that the security situation was still fraught. Armed guards were posted throughout supposedly safe villages and U.S. officials described areas as unsafe at night, even in places without much of a North Vietnamese presence. In his reporting, Bowles acknowledged that there were U.S. military successes worth celebrating, but his analysis also revealed concerns about the growing costs of the war and the effectiveness of the U.S.’s North Vietnamese bombing campaign. While Bowles thought U.S. military successes were important, he placed a lot of faith in South Vietnam’s September 11th, 1966, Constitutional Assembly elections. He reasoned that successful elections like these would help win over skeptical South Vietnamese citizens and propel momentum for a favorable settlement to the war.

Within a year though, Bowles’ Vietnam anxieties returned. Writing to Vice President Hubert Humphrey in May 1967, Bowles remarked that it was “impossible for the United States to win a ground forces numbers game in Southeast or East Asia.” Bowles’ past support for the war rested on his conviction that the fight would be limited, but would also produce a functioning government that represented the best interests of the South Vietnamese people. What Americans saw, including Bowles, was just the opposite: a wider war and a corrupt South Vietnamese government. Bowles grumbled that the 1966 South Vietnamese elections had not produced any political breakthroughs and the ruling government had taken no steps to establish “a stable, just and peaceful society.”

Bowles reached his breaking point on Vietnam in April 1968. Not long after the Tet Offensive, and two days after President Johnson’s announcement of immediate peace talks, Bowles lamented that the war had cost the U.S. too much. In his April letter to Richard Celeste, Bowles called years of U.S. military reports “dismally wrong.” The retreating and weakened North Vietnamese enemy described in such reports did not match the one American soldiers found on the battlefield. Bowles’ biggest worry, though, was that the United States had “no realistic way out” of their Vietnam impasse. As much as Chester Bowles wrestled with the Vietnam War and its immediate impact on U.S. foreign relations, he also imagined a world after the war. Bowles, in two 1966 letters, hoped that once the fighting stopped funds once earmarked for war could be utilized for development work abroad. Besides increased funds, Bowles thought future U.S. foreign policy would be different, even peaceful, because the true takeaway of the Vietnam War was that the U.S. could not kill its way out of trouble. Bowles declared: “every American military man and civilian, from generals and ambassadors down to privates and office boys, has witnessed at first hand the limitation of military power in a revolutionary situation.” Speculating what the United States could do with just half the money set aside for wars, Ambassador Bowles believed those financial resources “could create a new world.” If a third of the funds went overseas for development, and the other two-thirds went to develop American cities, Bowles thought the future, both for the U.S. and the world, “would look a lot less bleak.”

Chester Bowles’ second stint as the U.S. Ambassador to India coincided with his breaking point on the Vietnam War. He wrestled with uncomfortable facts until it was clear to see that the war’s costs were too great. The ambassador feared that the war harmed the United States’ ability to influence Asian nations and exercise power in the developing world. What the U.S. was losing – in lives, money, and respect – was far greater than what could be earned by continuing the U.S. presence in Southeast Asia. Bowles represented a generation of diplomats who truly believed the U.S. had the power to remake the world into something better and more just. Bowles’ voice was ignored and his post-war vision never realized, instead the tragic reality resembled what Bowles had feared all along.