This digitized collection of selected volumes of medical books and manuscripts, dating from 1300 to 1921, is drawn from the Medical Historical Library, Cushing/Whitney Medical Library.  This collection reflects the Arabic and Persian intellectual efforts that translated, augmented, and transmitted Greek and Roman medical knowledge to Western societies during the Renaissance.  It includes iconic works by authors such as Avicenna and al-Razi.

The Medical Historical Library, originally formed by the joining of three collections by bibliophiles Harvey Cushing, John Fulton, and Arnold Klebs, has over 120,000 volumes dating from the 12th to the 21st centuries.  While primarily composed of works in Western medicine and science, a smaller selection of Arabic and Persian books and manuscripts are a "hidden collection" in the Library.  Through the support of the Arcadia Fund, the Medical Historical Library was able to digitize Arabic and Persian books and manuscripts, as well as early translations in Latin, French, and English.

This project was conceived to build on the earlier success of past Middle Eastern digitization efforts at Yale University Library and a past collaboration between YUL and the University of London’s School of Oriental and African Studies (SOAS), which digitized a small selection of Arabic and Persian manuscripts which are available at the Arabic and Middle Eastern Electronic Library (AMEEL).  The project added another level beyond the Arabic/Persian collection, as early Latin, French, and English translations of Arabic medical works were selected to be part of the grant.  The transmission and translation of Arabic and Persian medicine into Europe has been a source of scholarly interest, as Arabic and Persian societies were vital in the retention and augmentation of ancient medical knowledge.

For more information about this digital collection, contact the Medical Historical Library via email or phone 203-737-1192.

The use of images from this collection may be subject to the copyright law of the United States (Title 17, United States Code) or to site license or other rights management terms and conditions. The person using the image is liable for any infringement of the law. 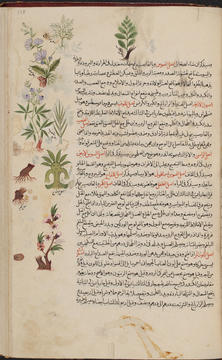