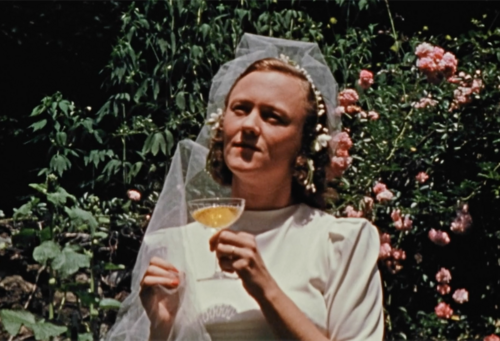 Treasures from the Yale Film Archive presents the online debut of two recently-preserved short films by S.W. "Winkie" Childs, Jr. '27 and Cynthia Childs, Seductio Ad Absurdum and I'd Be Delighted To!

In the fall of 2016, the Yale Film Archive received a collection of more than 400 reels of 16mm amateur film productions and home movies made between the 1920s and the 1960s. The films were made by Winkie Childs, an amateur film enthusiast and third-generation Yale alumnus, who graduated Yale College in the class of 1927.

Childs was a cinema enthusiast and amateur filmmaker from an early age. In the mid-1920s, he and his friends in Norfolk founded The Purity Players, a group of amateur cinema enthusiasts who wrote, produced, directed, and acted in their own productions using the new technology of 16mm film. Their productions includes films such as Tracks of Blood (1925), Passion's Toll (1925), The Steppes of Silence (1926), and The Horsemen of Death (1926). As Childs told Amateur Movie Makers in July, 1927, “We consider ourselves somewhat in the light of pioneers in the field of amateur motion picture production.” In 1927, the group tackled its most ambitious project: the first filmed adaptation of Henry Fielding’s Tom Jones. The lengthy and somewhat troubled production was finished just before Childs’ college graduation, and was screened to a packed house at Yale’s Sprague Hall in June, 1927. The film was described by faculty in the Yale English department as “splendid,” “wonderfully spontaneous,” and “one of the best things done at Yale in years.” The Childs family donated the only known print of Tom Jones—which Amateur Movie Makers labeled “the first amateur super-feature”—to the Yale Film Archive, along with other Purity Players productions and Childs’ prodigious collection of amateur films and home movies.

In June of 1929, Childs married Cynthia Cheney. Under the “Cynniewink” banner (a portmanteau of “Cynthia" and “Winkie"), they created ambitious amateur productions on a variety of subjects, in black and white and color, including early experiments with synchronized sound, in-camera effects, and customized intertitles. Their best known film is the silent short I'd Be Delighted To! (1932), which received a number of awards and was named to the Amateur Cinema League’s “Ten Best” list for 1932. In the film, we see a man and woman prepare and enjoy a romantic dinner. The filmmakers capture everything from the telephone invitation to bathing, dressing, preparing food and making drinks, and the couple sharing a post-dinner cigarette, with one catch: you never see the couple’s faces, only their hands and feet. Eight years later, they made Seductio Ad Absurdum (1940), directed by Cynthia and with photography and special effects by Winkie, about a wife’s daydream of infidelity on her anniversary, including a decadent night on the town in New York City. The Yale Film Archive has preserved both of these films, and presents them online for the first time, with scores composed and performed by Stephen Horne.

To accompany these films, the Yale Film Archive presents a 2020 interview with Hope Childs—Winkie and Cynthia’s daughter-in-law and the donor of the film collection—in which she shares family history and her memories of watching these films at home.