The following films have been preserved on film by the Yale Film Archive, formerly the Yale Film Study Center, since 2008, utilizing original or otherwise unique materials in its collections. For more information on any of these films, please contact Managing Archivist Brian Meacham via email. 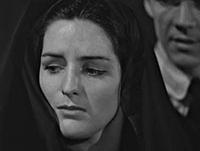 PASSAGES FROM JAMES JOYCE’S FINNEGANS WAKE (1965, 35mm)
Pioneering animator Mary Ellen Bute’s only feature-length, live-action film adapts James Joyce’s novel. Made in collaboration with her husband, cinematographer Ted Nemeth, the film is a witty, deft, and Joycean adaptation which one critic called “an outstanding example of what avant-garde filmmaking ought to be.” Preserved at Colorlab through a grant from the National Film Preservation Foundation, 2010.
Film Notes

I’D BE DELIGHTED TO! (1932, 16mm)
An award-winning short film by S.W. Childs, Jr., pioneering amateur filmmaker and the driving force behind the first student feature film ever made at Yale, TOM JONES (1927). An enthusiastic maker of short dramas with friends in his amateur dramatic filmmaking group known as “The Party Players,” Childs continued to make films after graduating from Yale in 1927, including this short. Preserved at Colorlab, 2018.
Conversation with Hope Childs

SEDUCTIO AD ABSURDUM (1940, 16mm)
This husband-and-wife collaborative effort, with “Photography and Special Effects” by S.W. Childs, Jr., tells the story of a couple’s wedding anniversary, an idle fantasy-turned-nightmare, and a dreamy trip through the neon and champagne world of the very wealthy. Preserved at Colorlab, 2019.
Conversation with Hope Childs 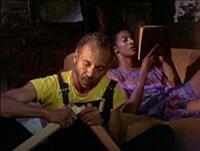 LOSING GROUND (1982, 35mm)
The writer, teacher, and filmmaker Kathleen Collins was one of the first Black women to direct a narrative feature film. LOSING GROUND is her masterwork, a beautifully observed drama about an academic (Seret Scott) and her artist husband (Bill Gunn) who leave New York for a summer in the country, where their relationship is tested by professional rivalry and romantic jealousy. More than two decades after Collins's death at the age of 46 in 1988, the filmmaker’s daughter donated original negatives for LOSING GROUND and her previous short film, THE CRUZ BROTHERS AND MISS MALLOY, to the Yale Film Archive. Restoration work in 2022 included 4K scans of the original negative and the creation of a 35mm preservation negative and 35mm release prints for the first time. Restored by the Yale Film Archive and The Film Foundation. Funding provided by the Hobson/Lucas Family Foundation.
Film Notes 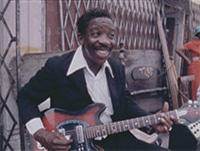 PLASTIC SAINTS (1968, 16mm)
COSTUMED DANCER (1969, 16mm)
42ND ST MOVIE (1969, 16mm)
Three of the first films made by Emmy award-winning cinematographer and filmmaker Nick Doob. COSTUMED DANCER and 42ND ST MOVIE were made as part of Doob’s “Scholar of the House” project his senior year at Yale. Preserved at Fotokem through a grant from the National Film Preservation Foundation, 2017.

STREET MUSIC (1979, 16mm)
This feature-length documentary presents performances by 19 street musicians in seven cities across the United States, and was one of documentarian Nick Doob’s first feature-length films. The film features singers, guitarists, drummers, dancers, and others, including street performance legends like Porkchop, Brother Blue, the Automatic Human Jukebox, and Jimmy Davis. From San Francisco to New York and Chicago to New Orleans, the film captures a cross-section of Americans performers filled with raw talent, showmanship, and hustle, and it presents a time capsule of the fashion, architecture, and culture of the 1970s. Preserved at Fotokem, 2018.
Film Notes
Filmmaker Conversation 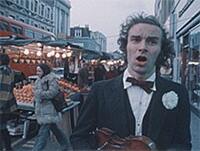 LONDON SONGS (1973, 16mm)
Prior to STREET MUSIC, Doob made this 27-minute documentary, which follows his Yale classmate David Sewall, a violinist and singer, as he performs traditional and original songs on the streets and in the pubs, parks, and markets of London. In color and in black and white, Sewall's unique style and good humor transfix audiences of curious school children, West End theater-goers, and passersby on the sidewalk. His energetic performance of then-current hit "Young Girl" for a group of Covent Garden flower sellers is a particular highlight, and the film closes with a moving rendition of “Danny Boy” that prompts pub-goers to join Sewall in song. Preserved at Fotokem, 2021. 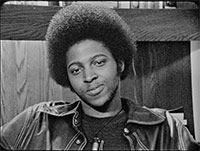 BLACK AT YALE: A FILM DIARY (1974, 16mm)
One of the most important documentaries made at Yale, Warrington Hudlin’s 1974 feature-length film follows students Erroll McDonald and Eugene Rivers, examining their experiences as black students at Yale in the early 1970s. The Yale Film Archive gratefully acknowledges Anthology Film Archives for providing the original elements for this project. Preserved at Fotokem, 2017.
Film Notes 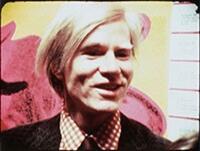 END OF THE ART WORLD (1971, 16mm)
Alexis Krasilovsky made END OF THE ART WORLD, the first undergraduate student film made by a woman at Yale University, as part of her work  in the Whitney Museum Independent Study Program, studying with the filmmaker Michael Snow. Snow is one of many artists who appear in the film, including Jasper Johns, Robert Rauschenberg, Roy Lichtenstein, and Andy Warhol, whose Whitney solo show opening Krasilovsky was one of the only people allowed by Warhol to film. The film was preserved, utilizing the two extant prints of the film donated by the filmmaker in 2019, at Colorlab, with support from the National Film Preservation Foundation, in 2022.
Film Notes 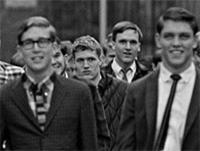 TO BE A MAN (1966, 16mm)
Director Murray Lerner’s hour-long “educational film about education,” began as a commissioned piece for Yale University, and was eventually broadcast on more than 60 local television stations across the country. The film captures students and faculty grappling with the meaning and purpose of education, and is a time capsule of Yale in the mid-1960s. Preserved at Fotokem, 2016.
Film Notes

OUR UNION (1949, 16mm)
Activist, writer, and filmmaker Carl Marzani formed Union Films in 1946 and produced a number of documentaries on labor-related topics and campaign films for Progressive Party candidates. OUR UNION is both a documentary about the formation of the United Electrical, Radio, and Machine Workers of America, and a fictionalized story depicting the effects of the blacklist in the early days of the UE. Preserved at Colorlab through a grant from the National Film Preservation Foundation, 2011. 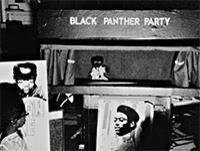 MAYDAY (1970, 16mm)
Made by the film collective May First Media, MAYDAY examines the events surrounding the Black Panther trials in New Haven, and the university’s unorthodox reaction. Preserved, from elements provided by filmmaker Josh Morton, at Fotokem, 2016.
Filmmaker Conversation

PUPPET SHOW (1970, 16mm)
Josh Morton’s second film for the Black Panthers’ New Haven chapter documents a presentation by the “Revolutionary People’s Theater,” telling the story of Lonnie McLucas and the police in New Haven, through puppets. Preserved at Fotokem, 2016. 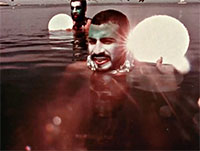 SCREENTEST (with Caroline Mouris, 1975, 16mm)
This live-action film from the Mourises, made with a grant from the A.F.I., features nine creative artists: Pedro Barrios, Stephen Cervantes, Herman Costa, Albert Elia, Adolph Garza, Philip Haight, Richard Hartenstein, Ronald Kolodzie, and Noel Levert. The film captures “the inventiveness that went into their visual imagery, the quickness with which they perceived and even anticipated visual trends, and the devotion to their own particular kinds of artistry which bespoke a true professionalism in this activity which they performed mostly for themselves and their friends.” Preserved at Colorlab, 2019. 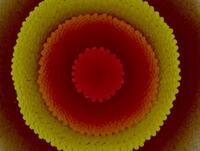 IMPASSE (with Caroline Mouris, 1978, 16mm)
An animated short film created using millions of Avery labels, IMPASSE was made by Frank and Caroline Mouris while Frank was enrolled at the American Film Institute in Los Angeles. In the film, a red arrow and a white dot travel through tessellating layers of shapes and colors, set to a soundtrack by percussionist Roland Miles. IMPASSE was preserved thanks to a collaborative effort between the Academy Film Archive and the Yale Film Archive, who each provided original film and audio elements to enable the preservation of the film. Preserved at Fotokem, 2020.
Filmmaker Conversation

JAMES BALDWIN: FROM ANOTHER PLACE (1973, 35mm)
Photographer and filmmaker Sedat Pakay (1945-2016) was born in Turkey and came to the United States to attend the Yale School of Art and Architecture in 1964. After meeting James Baldwin that year, he returned home to Turkey in 1970 to make a film about the exiled writer, whom he described as "a photographer’s dream." In 1973, Pakay completed the film, JAMES BALDWIN: FROM ANOTHER PLACE, and in 2019, the National Film Preservation Foundation awarded the Film Archive a grant to preserve the film from the original 35mm elements. Preservation work by Fotokem was completed in 2019, and a significant collection of unseen outtakes were also preserved through laboratory work by Colorlab.

KAPAUKU 1954/55 - 1959 (1959, 16mm)
A document of an early encounter between native New Guineans and Western anthropologists, KAPAUKU 1954/55 - 1959 was shot, edited, and used in lectures by Prof. Leopold Pospisil, Yale Anthropology professor and Curator in the Division of Anthropology at the Peabody Museum from 1956 until his retirement in 1993. Preserved at Colorlab through a grant from the National Film Preservation Foundation, 2015.
Film Notes 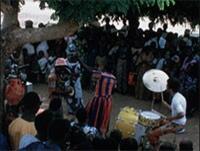 TONY WILLIAMS IN AFRICA (1973, 16mm)
Willie Ruff’s film about the American jazz drummer Tony Williams traveling to Senegal features Super 8mm footage of Williams and indigenous drummers, as well as a framing section with Ruff, Williams, and pianist Dwike Mitchell presenting the film on 16mm to local children. As Ruff wrote later, “It took me about a year to finish it, mainly for teaching purposes, and I began using it almost immediately in classes at Yale. Tony saw it then and declared it to probably be the best work of his life. The fact is, he didn’t understand what I was really after during the entire grueling enterprise, until he saw it on the Moviola, and I am told that he never stopped talking about it for the rest of his short life [as] one of his finest musical accomplishments.” Preserved at Colorlab from the only extant 16mm print plus 4K scans of the original Super 8mm footage with support from the National Film Preservation Foundation in 2021.
Film Notes 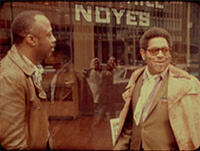 THE BEGINNINGS OF BEBOP (1981, 16mm)
Willie Ruff, musician, composer, educator, filmmaker, and Yale School of Music alumnus was on the faculty of the Yale School of Music from 1971 until his retirement in 2017. He directed and produced this short film which follows Dizzy Gillespie and Ruff’s musical partner Dwike Mitchell on a tour of key locations in the history of bebop in New York City. Gillespie led the filmmakers to Minton’s Playhouse, Carnegie Hall, the former site of the Savoy Ballroom, and made an unannounced stop at Miles’ Davis home. Preserved at Fotokem, 2019.
Film Notes
Filmmaker Conversation

THE BOY WHO SAW THROUGH (1956, 35mm)
The debut of Christopher Walken (credited here as “Ronnie Walken”), this short film directed by George Stoney and produced by Mary Ellen Bute was awarded a prize at the Brussels Short Film Festival. Preserved at Cineric through a grant from the National Film Preservation Foundation, 2008. 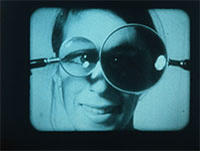 16 MILLIMETER EARRINGS (1979, 16mm)
Made in collaboration with the artist Meredith Monk, Withers’ film documents one of Monk’s earliest solo pieces, thirteen years after it was originally presented at Judson Memorial Church in Greenwich Village. The piece combines dance, music, singing, and projected images, and was filmed in the Great Hall of the City College of New York. Along with short films, audiotapes, and props from the original theater piece, the filmmakers constructed new props and a set, found new images, recorded new sound, and re-filmed projections for the recreation. Preserved at Colorlab through a grant from the National Film Preservation Foundation, 2018.
Filmmaker Conversation