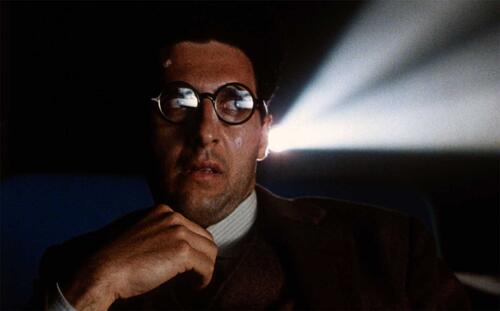 Introducing Treasures Screentests, a limited series aimed at bringing films from the Yale Film Archive back to the big screen, but in a brand-new location: the newly-renovated Yale Humanities Quadrangle's Alice Cinema (Room L01, 320 York Street). In keeping with Yale's COVID-19 prevention policies, Treasures Screentests screenings are limited to asymptomatic, fully-vaccinated members of the Yale community at this time. Masks and Yale ID cards are required. Reserve your free tickets here.

Rear Window
7 p.m. Thursday, April 7, 2022
Alfred Hitchcock (USA, 1954, 112 mins, 35mm print)
James Stewart, Grace Kelly, and Raymond Burr star in this voyeuristic thriller about the trouble we can get into when trapped at home for too long. Considered one of Hitchcock's best, Rear Window garnered four Academy Award nominations, and it was added to the National Film Registry in 1997. "Rear Window shows the Master of Suspense at his most spare, sophisticated, and sinisterly clever" (Patrick Monaghan).
RSVP

Persepolis
7 p.m. Thursday, April 21, 2022
Marjane Satrapi & Vincent Paronnaud (France, 2007, 96 mins, 35mm print)
Join us for a 15th anniversary screening of the Oscar-nominated Persepolis, an animated tale of girlhood during the Iranian Revolution. Adapted from Satrapi's autobiographical graphic novels, Persepolis provides "a vivid, at times heartbreaking, portrait of a life and a nation in crisis" (V.A. Musetto) that still remains "full of warmth and surprise, alive with humor and a fierce independence of spirit" (A.O. Scott).
RSVP

Class Pictures: Student Archivist Screening Night
7 p.m. Wednesday, May 4, 2022
The culmination of the Yale Film and Media Studies course "The Film Archive," this screening will highlight several eclectic short films overseen by student archivists and acquired by the Yale Film Archive. The course is built around a semester-long project in which each student selects, aquires, inspects, repairs, and researches a film to be added to Yale's collection. In Class Pictures, they will present these 16mm shorts, with an introduction to each film by the student archivist who selected and worked on it.
RSVP