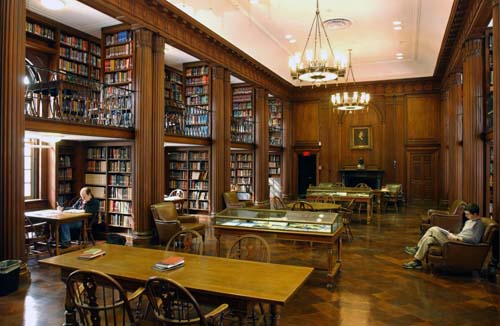 In the spring of 1891, Professor George Edward Day proposed the establishment of a new library at Yale, one which he hoped would become "the most full and complete collection of works on Foreign Missions in the United States and perhaps in the world." Day's proposal came at a time when the foreign missions enterprise was entering the second decade of its half century heyday. Tens of thousands of Americans would sail abroad in the coming decades, seeking to spread their Christian beliefs, bringing with them their devotion to Western civilization.

George Edward Day was Professor of Hebrew Language and Literature at Yale from 1866 to 1891. His avocation was the study of missions and from his retirement until his death in 1905, he devoted himself to the new "Historical Library of Foreign Missions," later known as the Day Missions Library. Day traveled widely to purchase books, and by 1905 the Library already contained more than 7,000 volumes. Generous bequests in the wills of Day and his wife, Olivia Hotchkiss Day, made it possible to erect a building for the Library in 1911. The Day Library was envisioned as a magnet for those preparing to be missionaries. The original building was designed to include a printing press, carpentry shop, map-making room, and photography room, thus providing opportunity for training in practical skills.

When the Day Missions Library was formed, Yale University already had a longstanding interest in the missions movement. In a chapter entitled "Yale's Contribution to Foreign Missions" in the 1901 work Two Centuries of Christian Activity at Yale, Day Missions Librarian Harlan P. Beach reported that 162 Yale students entered missionary service in the nineteenth century and nearly half of them during the years of George Edward Day's active service at the Divinity School.

Day envisioned a Library of Foreign Missions containing six types of material: the history of missions in various countries, missionary biography, the annual reports of missionary societies, periodicals, works prepared by missionaries for the use of the peoples of mission fields, and literature relating to Jewish missions. Added to these categories was related literature in areas such as ethnology, geography, comparative religions, and linguistics. Protestant missions were the primary focus of collecting for the Library but essential Roman Catholic books and periodicals were also acquired.

The scheme of collecting for the Day Missions Library had a strong linguistic focus. Bible translations and ancillary material such as dictionaries and grammars were sought out, as well as tracts and books prepared by missionaries in the languages of the countries where they worked. The collection is also noteworthy for its emphasis on documentary literature such as annual reports and periodicals. An enormous amount of library staff time that was invested in systematically soliciting the reports and serials of hundreds of missions organizations.

Six printed catalogs of the Day Missions Library were issued between 1892 and 1902, listing the first 7,000 and more accessions of the library. All of the holdings of the Day Collection are now listed in Orbis, Yale's online catalog.

Because of its early origin, the Day Library contains many works that are available nowhere else in the United States. Its holdings document not only institutional histories, but also topics such as the role of women in the missions enterprise, the role of missionaries in portraying non-Western cultures to the home public, and the impact of missions on distinctive ethnic groups abroad. By 1929, the Day Missions Library included nearly 30,000 volumes; 323 monthly serials were received; 500 letters were sent to mission agencies and institutions requesting the donation of their publications. Over the years, the holdings of the Day Missions Library have been rivaled only by the collection of the Missionary Research Library in New York City.

When the Divinity School moved to a new campus in New Haven in 1932, its three specialized libraries (the Trowbridge Reference Library, Sneath Library of Religious Education, and the Day Library) were consolidated. At this time, the Day collection included 21,484 volumes-some two thirds of the Divinity Library's original collection. The Day Library was given a special wing in the new building, but the gradual process of its absorption into the Divinity Library as a whole had begun.The collection has continued to grow over the years, with support from an endowment established by the Days and, since 1981, with income from a fund established by Kenneth Scott Latourette, D. Willis James Professor of Missions and World Christianity, 1921-1953. Since 1950, missions-related material has not been classified according to the "Day" system, but rather has been integrated into the Library's general collection. The "Day Missions Library" has come to refer to the entire corpus of missions-related documentation available at the Divinity Library, print and manuscript material.

Since 1970, archival and manuscript collections have become an increasingly important component of the Day collection. The Library's China Records Project and subsequent collecting efforts have made its China-related resources particularly strong. Online finding aids are available for all of the Library's original holdings. The Library has the world's most comprehensive microform collection of missions-related archives for which the originals are held in other repositories.

From its inception, the Day Library was envisioned as a resource not only for Yale, but also for the wider scholarly community. It was to be not only for Yale students, but also "for that expert outside constituency who will come here for special investigation and work." The vision of the Day Library as a "literary workshop" has become a reality over the years as rare holdings in the collection attract scholars from around the world.