The Henry A. Kissinger Papers, Parts II and III

The papers consist of correspondence, memoranda, writings, speeches, photographs and other material that document the career of the diplomat, author and foreign policy expert and scholar Henry A. Kissinger.  Dr. Kissinger served as United States secretary of state from 1973 to 1977 and as assistant to the president for national security affairs (national security advisor) from 1969 to 1975.

Part II (MS 1981) documents Dr. Kissinger’s pre-government, government, and post-government careers.  It is comprised of materials that are owned either by the Library of Congress or Yale University.  When the materials were in Dr. Kissinger’s possession, they formed an integrated collection.  To maintain that integrity, as well as increase access to these materials, the two institutions agreed to a joint project undertaken by Manuscripts and Archives, Yale University Library to arrange, describe, and digitize them.

Part III (MS 2004) is comprised of materials mainly documenting Kissinger’s post-government career after 2000 although a few items pertain to earlier years.  The materials are owned by the Yale University Library.

In 2015, Yale University Library digitized Parts II and III in their entirety.  The online access system linked to this webpage through the search button to the right includes description and digital reproductions of all of the materials in the two parts.

The arrangement, description, and digitization of Parts II and III was generously funded by Charles Johnson, Yale ‘54, and Nicholas Brady, Yale ‘52.

(Part I, housed in the Library of Congress, consists of materials primarily documenting Dr. Kissinger’s  government career and includes copies of records from his government service.)

Research Strengths of the Collection

Parts II and III together provide rich and extensive documentation on numerous aspects of Dr. Kissinger’s career.  Areas of particular strength for this collection include materials concerning Kissinger’s:

The papers in Parts II and III are an important supplement to the official records in documenting Kissinger’s diplomatic career, but they do not include most of these official records.  For those, contact the Library of Congress for Part I of the Kissinger papers or the National Archives and Records Administration.

More detailed description of the contents of Parts II and III is available accompanying the digital collection.

The materials in Parts II and III have been designated as one of three access levels – open, open with permission, or restricted.  In Part II, the following sections are open for research:  Writings in Series I; White House, State Department, and Public correspondence and Speeches and public statements in Series II; 1982 heart surgery correspondence and Speeches and writings in Series III; and Series IV-VII.  In Part III, Series IV and VI-VIII are open for research.

Requesting access requires researchers to create an account.  Each folder of materials that requires permission to access contains a “request access” link to a form that must be completed and submitted by researchers.  Researchers will be informed by email when their request has been approved or denied.

Part III, Series III is closed for twenty-five years after Kissinger's death, after which it is open to research. Researchers may not request access to the documents in this series; the documents will be automatically opened for research when their restrictions expire.

Copyright is retained by Henry A. Kissinger for works he has authored and provided during his lifetime, to the Special Collections at the Yale University Library. After the lifetime of Dr. Kissinger, all intellectual property rights, including without limitation all copyrights, in and to the works authored by Dr. Kissinger pass to Yale University, with the exception of all intellectual property rights, including without limitation all copyrights, motion picture and/or audio rights in and to his books, interviews and any films that will be retained Dr. Kissinger’s heirs and assigns. Copyright status for collection materials other than those authored by Dr. Kissinger is unknown.

Except for the limited purposes allowed by the Yale University Library Guide to Using Special Collections, exploitation, including without limitation the reproduction, distribution, adaption, or display of Dr. Kissinger’s works protected by the U.S. Copyright Act (Title 17 U.S.C. §101 et seq.) beyond that allowed by fair use requires the written permission of the copyright owners. Works not in the public domain shall not be commercially exploited without permission of Dr. Kissinger, the copyright owner. Responsibility for any use rests exclusively with the user.

Johnson Center for the Study of American Diplomacy

The Kissinger papers at Yale serve as a foundation for the Johnson Center for the Study of American Diplomacy.  As a program of Yale’s Jackson Institute for Global Affairs, in collaboration with International Security Studies and the Brady-Johnson Program in Grand Strategy, the Johnson Center encourages research and teaching on United States foreign policy by drawing on the Kissinger papers as well as other important Yale library collections in this field.  The Center brings prominent statesmen to campus as Kissinger Senior Fellows; hosts Kissinger Visiting Scholars who are researching and writing about the history and practice of American diplomacy; and organizes an annual conference and a variety of other events relating to international affairs. 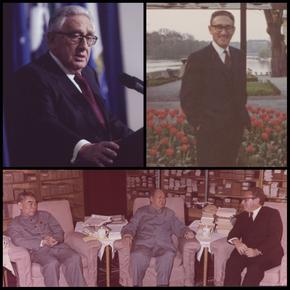