This digitized collection of annual reports of Christian mission agencies and institutions is drawn from the Day Missions Collection of the Yale Divinity Library. The annual reports, dating primarily from the nineteenth century through the mid‐twentieth century, provide rare and valuable information about events and issues in urban and rural areas on all continents. Mission agencies reported not only on their own activities in evangelization, education, and medical work, but also about political unrest, plagues, local customs, etc., in the areas where they were active. Because of their specificity and duration, the annual reports provide valuable primary source documentation that is relevant not only to the history of the missionary movement and world Christianity, but also to the fields of anthropology, sociology, the history of medicine and science, gender studies, and linguistics.

The Day Missions Collection at the Yale Divinity Library is known as the preeminent North American collection for documentation of the history of the missionary enterprise and the development of Christianity throughout the world. The establishment of Christian missionary societies engaged in overseas evangelism, education, and medical work was an important social movement that emerged in the nineteenth century. By midcentury most Protestant denominations and many Catholic orders had created mission agencies and were actively recruiting missionaries to work in foreign lands. Yale Professor George Edward Day's proposal to create a Yale library dedicated to documenting this movement came at a time when the foreign missions enterprise was in its heyday and the Day Collection is well known for its breadth and depth.

Through the support of the National Endowment for the Humanities, the Divinity Library has digitized 5,000 volumes of annual reports and periodicals from the Day Collection. This project complements work done earlier under a grant from the Arcadia Foundation to digitize 50,000 pages of annual reports. For more information about this digital collection, contact the Divinity Library via email (divinity.library@yale.edu) or phone 203-432-5289. 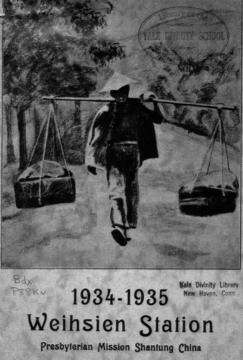