Zachary Haas is an enterprising young trombonist, educator, and activist. Based in New England, he appears frequently with ensembles such as the Vermont, Hartford, and New Haven Symphony Orchestras, as well as Orchestra New England, The Rodney Marsalis Philadelphia Big Brass, and as a substitute for New World Symphony.

Haas holds a Master of Music Degree from Yale School of Music, where he was awarded the school’s John Swallow Prize for Brass upon graduation. Prior studies include Royal College of Music, London and Boston University. His principal teachers are Scott Hartman, Gabriel Langfur, and John Rojak. 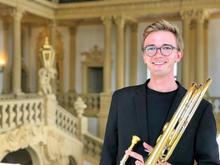