Carla Baricz (B.A., Columbia University; Ph.D., Yale University) joined the Yale University Library in 2020, after teaching at Yale and the Hebrew University of Jerusalem. Among other fellowships, she was a Fulbright fellow in 2015, a Stanley Wells CBE Fellow at the Shakespeare Birthplace Trust in 2016, a translator in residence at the Romanian National Museum of Literature in 2018, and a Mandel Scholion Postdoctoral Fellow 2018-2020. Her scholarly interests include early modern English literature, genre studies, translation studies, and the public humanities. She is an advisor in Benjamin Franklin College.

Selector for these areas:

Librarian for these majors:

“Richard Jones’ Tamburlaine, or How to Print an Early Modern Play and Sequel,” Sixteenth Century Journal 51:2 (2020).

“Lena Constante’s The Silent Escape and the Journal as Genre in a (Post)Communist Literary Field,” Rumba Under Fire: The Arts of Survival from West Point to Delhi, ed. Irina Dumitrescu (Brooklyn, NY: Punctum Books, 2016), 31-52. 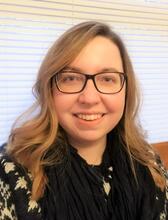