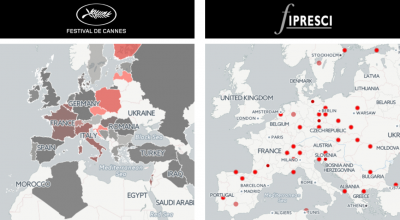 Cinécircuits provides an interface that aids scholars in analyzing the distribution networks of the global film festival circuit, which has proven to be instrumental in impacting both the commercial success of a given film and the visibility of national cinemas. With the aid of the GIS mapping software Carto, users are invited to geographically pinpoint the locations of prominent festivals as they proliferate over time. Similarly, the interface provides a distribution of the various nationalities represented for a given festival year.

Cinécircuits has been awarded two Digital Humanities Lab Seed Grants to first collect and then visualize the data.