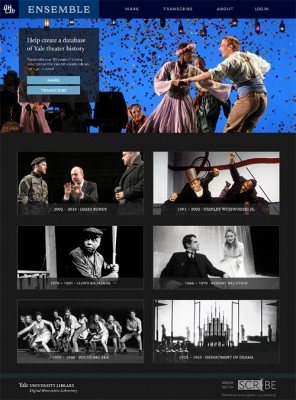 Ensemble @ Yale is an experiment with crowdsourced transcription of 90 years of programs from the Yale School of Drama, Yale Repertory Theatre, and other theatrical groups on campus. The project enlists users to extract crucial relationship information from programs: Which actors and directors worked together? Which playwrights' works have been produced the most often at Yale? Which actors have played major roles onstage at Yale? Simple OCR (Optical Character Recognition) would not be able to discover complex semantic relationships, but human users can do so while they browse through the archive.