On April 11, 2016 work began at LSF to renovate Module 4 for future use by the university library system.  Since it was constructed in 2002, Mod 4 has been occupied by the Yale University Art Gallery (YUAG) which utilized the space for supply storage and as a workshop area.  Over the past several months, YUAG has relocated both the operations and the materials formerly stored in this portion of the Hamden facility to new quarters at West Campus.

The first stage of the renovation project involves the demolition of the Mod’s existing shelving which does not meet the needs of the library (photo 1).  In order to create an egress for the removal of the old shelving, a large door has been cut out of one of the Module’s rear panels (photo 2). This door will also serve as the entrance for new uprights and shelving when they are delivered for installation sometime in August.

In addition to the shelving installation, much other work needs to be completed before the space is available for the library.  The floor needs to be ground and scrubbed, ductwork and lighting must be replaced and realigned, and the HVAC overhauled and re-set to the YUL’s specifications.  Fire suppression/sprinkler lines will also need to be realigned and augmented, while security fixtures must be moved or installed.

The target date for the completion of the renovation is late November 2016.  Once the space is officially turned over to the YUL, LCS staff will begin labeling, barcoding, and scanning the shelving to introduce it into the LSF’s inventory software. Module 4 will add over 7K shelves to the YUL’s storage capacity once it comes online.  Two remaining modules at the Hamden site (Mods 5 and 6) will continue to be occupied by YUAG. 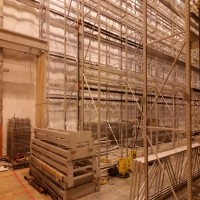 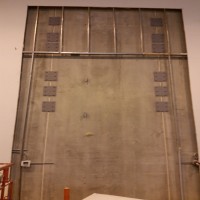