Fourteen free exhibits you can see right now at Yale 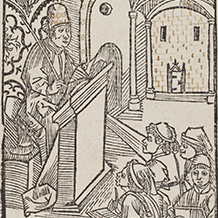 The 300-year history of Yale. Photography and the American West. Art and music of World War I. Divinity students in the turbulent 1960s. The humble origins of caricature. Pablo Neri's view of the human body. Sol LeWitt's drawing on walls. Rare botanical specimens. At Yale libraries and museums right now, there are exhibits on all these subjects and more. And they're all free and open to the public. Figure out what you'd like to see and click through to the calendar entry for opening times and further details. Or visit calendar.yale.edu anytime to see what's new at Yale.

Eye on the West: Photography and the Contemporary West A display of 158 photography from the Beinecke Library collection, made by 20 photographers since 1960, encourages viewers to consider how photography has shaped contemporary perceptions of the American West and reflect on the continuing relationship between region and medium. Beinecke Rare Book & Manuscript Library, 121 Wall Street, through Dec. 16.

The Yale University Herbarium: Its People, Specimens and Contributions Biographical information on people influential in the Herbarium’s 150-plus-year history is presented with stunning images of botanical specimens collected during field research in locales ranging from Connecticut to Ecuador to China. Center for Science & Social Science Information (CSSSI), 219 Prospect Street, through Oct. 31. (This exhibit can also be viewed online.)

“To Be Ourselves in Print”: Divinity Student Publications of the 1960’s In a turbulent era, students publications on the campuses of Andover Newton Theological School, Berkeley Divinity School, and Yale Divinity School became off-the-grid literary forums for dialogue and debate on topics ranging from the Vietnam War to Black Power and Hippie Culture. Divinity Library, 409 Prospect Street, through Dec. 21.

Berkeley Divinity School: A Historical and Contemporary Perspective A 19th-century prayer book, a 1970s campus survey on homosexuality, and the contents of a time capsule retrieved in 2017 are among the archival materials telling the story of the Berkeley Divinity School, founded in 1854 and formally affiliated with the Yale Divinity School in 1971. Divinity Library, 409 Prospect Street, through Dec. 21.

On Numbers as System and Symbol Almanacs, maps, musical scores, poems, puzzles, and other works from the Arts Library Special Collections employ both practical and theoretical approaches to numbers, from counting sheep (and even clouds) to exploring such concepts as time, distance, money, and magnitude. Other works examine the relationship between numbers and language or color. William H. Wright Special Collections Exhibition Area, Robert B. Haas Family Arts Library, 180 York Street, through Dec. 14.

Learning the Law: The Book in Early Legal Education Selections from the Lillian Goldman Law Library's Rare Book Collection show how the content and design of early law books were used by teachers and students alike with examples spanning fifteen centuries of legal education in England, Europe, and North America. The Lillian Goldman Law Library, 127 Wall Street (Level 2), through Dec. 14.

Taking Up the Slingshot: Posters from the First Palestinian Intifada (1987-1993) These political posters and photographs are drawn chiefly from the Palestinian Liberation Movement Collection (MS 1701) in the Manuscripts and Archives department of Yale University Library. The exhibit was curated by Christopher Malley ’18, based on his senior essay in history, “Posters, Leaflets, and Stones: A Cultural History of the First Intifada.” Exhibition Corridor, Sterling Memorial Library, through Oct. 12.

“They Sang and Took the Sword” – Music of World War I Materials from the music library’s special collections and Historical Sound Recordings show how music reflected the evolving wartime moods and preoccupations of the American public, from popular songs to large scale choral and orchestral works. Many of the cited works have Yale connections. Gilmore Music Library, 120 High Street, through Dec. 21.

Britain in the World: A Display of the Collections Following the 2016 completion of a conservation project, the center’s collections have been newly reinstalled in restored and reconfigured galleries on the fourth and second floor. Visitors can now experience the renewed masterpiece of modern architecture by Louis I. Kahn and a reimagined installation of nearly four hundred works. Yale Center for British Art, 1080 Chapel Street, through Dec. 31.

An Indelible Mark: British Art of the First World War With selected objects from the center’s collections of prints, drawings, rare books, and manuscripts, this exhibit showcases a wide range of visual media by official war artists and amateurs alike. Seen together, the objects reveal the diverse visual strategies artists and designers developed to record, commemorate, and critique the First World War. Yale Center for British Art, 1080 Chapel Street, through Nov. 25.

Manuel Neri: The Human Figure in Plaster and on Paper Drawing on a recent gift from the Manuel Neri Trust of more than 150 sculptures and works on paper, the exhibit explores the artist’s fascination with the human form. Born in 1930, Neri is best known for life-sized plaster, bronze, and marble sculptures that combine classical figuration with the dynamic mark making of Abstract Expressionism. Yale University Art Gallery, 1111 Chapel Street, through Jan. 27, 2019.

Sol LeWitt Wall Drawings: Expanding a Legacy A range of the artist’s techniques can be seen, including bold geometric patterns executed in colorful ink wash and works composed entirely of fine graphite lines. The exhibit also celebrates the new Sol LeWitt Wall Drawing Study Center at Yale West Campus which will house the artist’s archive and be an international center for research on his work. Yale University Art Gallery, 1111 Chapel Street, through Jan. 27, 2019.

Seriously Funny: Caricature through the Centuries Prints, drawings, paintings and sculpture provides context for several important, recently acquired 19th-century French satirical lithographs within a larger comedic tradition. The witty works trace the development of caricature from its inception as a studio exercise to its pointed use in highlighting human foibles and, finally, to its disruptive role as an instrument of political change. Yale University Art Gallery, 1111 Chapel Street, through Jan. 27, 2019.

Image is from the exhibition "Learning the Law: The Book in Legal Education"  at the Lillian Goldman Law Library.