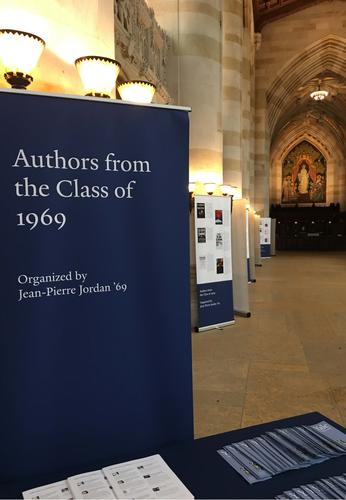 Among the graduates of the class of 1969 gathering on campus this weekend to celebrate their fiftieth reunion are dozens of authors. Forty-eight of their books—paired with brief author essays—are featured in a special exhibition in the Sterling Memorial Library Nave through Monday, June 3.

The titles and accompanying essays provide a glimpse into the diverse career arcs, avocations, and personal passions of the alumni. The range of topics includes the waterfalls of the White Mountains, international business arbitration, Burgundy wines, and  “a satirical recreation of the Beowulf legend.”

Several titles explore the lessons of history. Reed Hundt’s A Crisis Wasted: Barack Obama’s Defining Decisions analyzes choices made in the winter of 2008-09 about how the government would respond to the recession that Hundt believes led directly to the Trump presidency.

Thomas Hine, who has published widely on history, culture and design, has written about another kind of history in Populuxe, described as “a meditation – with pictures – on the world in which I and my fellow early boomers grew up.” Hine called the book “a gift from my childhood, a book I did not realized I had been researching all my life.

Other titles highlight different forms of creativity. Jay Castelli’s Who is This Tiny Child? contains the published words and music of a Christmas song he wrote. Classmate Marty Cohen chose to display an illustrated poetry collection, A Traveller’s Alphabet. William Stanisich’s Land’s End is a full-color monograph featuring his paintings of California’s Golden Gate Recreation Area.

“I have painted steadily since my days at Yale and continue to find inspiration in the light within the world around me,” Stanisich wrote.

A common thread is a life-long commitment to the printed word, often discovered or nurtured at Yale.

During his senior year, Michael Medved earned independent study credit for writing “a meandering, self-indulgent novel” that was never published. Instead, his writing led him to success as a non-fiction author with thirteen published books. For the exhibit, he chose to display The American Miracle: Divine Providence in the Rise of the Republic, a bestseller with a sequel coming out in November.

“I’ve held oddly assorted jobs in a crowded life, among them reviewing movies and hosting a syndicated radio talk show for twenty-three years,” Medved concluded. “But I’ve always come back to book-writing, which still strikes me as a uniquely honorable and enduring endeavor.”

Authors from the Class of 1969 was organized by class member Jean-Pierre Jordan and produced by Yale University Library’s exhibition staff, under the direction of Exhibits Production Manager Kerri Sancomb. View the exhibit in the Nave of Sterling Memorial Library through Monday, June 3.