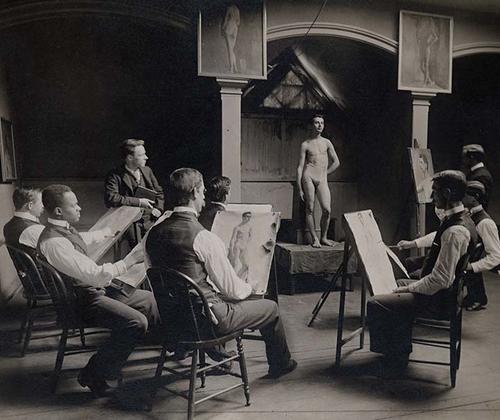 Six deeply researched exhibitions currently on display at different Yale Library locations offer new insights into diverse aspects of the history of Yale University and of the university libraries.

When the School of Fine Arts opened in Street Hall in 1869, Yale became the first university to create an art school. From the beginning, the school educated women as well as men in contemporary artistic practices including drawing, painting, and sculpture. Over the last century, the curriculum expanded to include students in drama, architecture, and design. Historic photographs, departmental records, student work, and other materials are used to show the school’s history and evolution over 150 years. (Curated by Miko McGinty (’93 BA, ’98 MFA) and Mar González Palacios.)

This exhibition pays tribute to the life and legacy of Wilmarth S. Lewis (B.A., 1918) as a scholar-collector, on the 40th anniversary of his bequest of the Lewis Walpole Library to Yale. Drawing heavily on the recently cataloged Lewis archives, the exhibition shows how Lewis’s total dedication to collecting works by and about the 18th century writer Horace Walpole resulted in a collection of extraordinary range and depth, and expressed itself in some surprising ways. It also evolved into a monumental achievement of scholarship in the Yale-Walpole edition, transforming perceptions of Walpole and his age. (Curated by Stephen Clarke.)

Six titles of Chinese classical texts were deposited at Yale in August 1849, making the Yale Library the first academic library in the United States to collect Chinese-language books. Samuel Wells Williams, the inaugural Professor of Chinese Language and Literature at Yale, was largely responsible for the earliest acquisitions, and Yung Wing, the first Chinese citizen to graduate from a major American college, was the most important contributor to the founding of Yale’s Chinese Collection. The exhibition draws on collections from the East Asia Library, Manuscripts and Archives, Sterling Memorial Library, Beinecke Rare Book and Manuscript Library, and the Haas Family Arts Library. (Curated by Michael Meng.)

In this exhibition, evolving techniques and procedures dating from ancient times through the present day are on display through a sampling of major historical plastic surgery texts from the Medical Historical Library. Discover technologies used in reconstructive and cosmetic surgery today through the models and tools on loan from Yale Plastic Surgery. Learn about innovations from Yale's own plastic surgery faculty through various publications, instruments, and the international. (Curated by Marc E. Walker, with assistance from Melissa Grafe.)

The Tsai Center for Innovative Thinking at Yale (CITY) opened in 2017, but innovation has always been embedded in Yale's culture. This media wall exhibit explores the past, present, and future of innovation at Yale, through highlights of Tsai CITY's "Intensives" for students and their many collaborations with campus partners, as well as some of the novel combinations of ideas and concepts that have occurred at Yale across time periods, disciplines, departments, and schools. (Curated by Laura Mitchell (Tsai CITY) and CSSSI librarians.)

Student Research on the History of Women at Yale, Exhibit Corridor, Sterling Memorial Library, through May 4, 2020.

Drawing on multiple library collections, Yale College students Valentina Connell ’20  and Mariana Melin-Corcoran ’20 have curated side-by-side exhibits on two different aspects of women’s history at Yale. Connell’s research looks at the evolution of housing policy and residential life in Yale College over the past fifty years, since the first undergraduate women were admitted in 1969, positing that residential life was one of the most challenging aspects of gender integration at Yale. Melin-Corcoran explores the history of women's involvement in the Yale School of Architecture. The Yale School of Fine Arts enrolled women students from its opening in 1869, but restricted them to more traditional courses of sculpture and painting. When the architecture department was inaugurated in 1916 and until the late 1940s and early 1950s, only men were allowed to enroll.