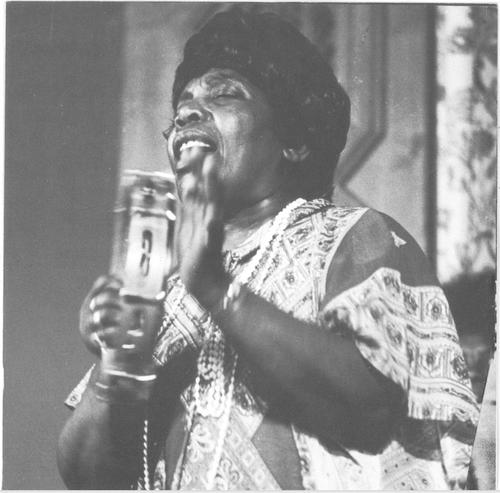 Gospel and folk singer Mary Elizabeth “Bessie” Jones (1902 -1984) grew up in poverty in Dawson, Georgia, singing hymns and school songs and learning about music and African lore from her formerly enslaved grandfather. As a little girl walking to school, she saw chained prisoners hacking roads out of red earth under the tack-studded lash of a brutal overseer. Seared on her memory were the fearsome rattle of the prisoners’ shackles and the work songs that set the rhythm for their backbreaking labor.

In a 1972 interview with jazz musician and Yale Professor of Music Willie Ruff (Yale B.A., M.A., honorary PhD), Jones recounted the experience and performed one of the work songs, “Sink Em Low.” She recalled that "...some of the hands was young and they get on the chain gang and they would beat ’em so bad because they wouldn’t get a shovel full of mud, you know, dirt. They get a little ’cause it was heavy. And, they made this song and they sang this song to tell ’em how to do it..."

Jones devoted her life to performing and preserving African American music and folklore, with particular emphasis on children’s songs and games. Ruff’s interview with Jones, preserved in Yale University Library’s Oral History of American Music (OHAM) collection, is just one example of material presented in “The Struggles and Triumphs of Bessie Jones, Big Mama Thornton, and Ethel Waters,”  a new, deeply researched online exhibit curated by Daniella Posy and highlighting the impact on American music of the three African American women vocalists,

An OHAM Fellow in fall of 2019, Posy drew on multiple library collections, including books, interview excerpts, photographs and other documentary materials to create a rich multimedia narrative that illuminates the contributions of the three women to American music and performance as well as the challenges they faced living through the Jim Crow era of racial segregation and legalized racism.

Interviews conducted by Ruff, Anthony Connor, and Richard Neff are interspersed with a wide range of materials, including YouTube performance videos; archival materials from the Yale School of Music and the Irving S. Gilmore Music Library; and photos from the Beinecke Rare Book and Manuscript Library’s Carl van Vechten Collection.

“The lives and works of Bessie Jones, Big Mama Thornton, and Ethel Waters should be celebrated because we live in a world that does not always properly recognize the contributions that African Americans have made to society,” Posy said. “In addition, I think it is important for our country to acknowledge its racial past that continues to shape the present, which comes through these performers discussing their experiences with racism during the Jim Crow era. I'm hoping that people will take the time to read through the exhibit, listen to the audio excerpts of the interviews held at OHAM, and watch the performances linked at the site.”

For her doctoral dissertation, Posy will continue her examination of African Americans and popular culture. She is examining mid- to late 20th century black periodicals and the ways that they have disseminated and challenged social norms regarding race, gender, and sexuality.

“Daniella’s impressive work is bringing transcripts and recordings to the public that have never been released before,” said OHAM Director Libby Van Cleve. “Some of the subject matter is very difficult—but it’s powerful and important history.”

OHAM, founded in 1969 by Yale music librarian and musicologist Vivian Perlis, is an ongoing oral history project and collection of Yale University Library’s Gilmore Music Library. The collection contains audio and video recordings as well as transcripts of in-depth interviews with composers and musicians across various musical genres, including classical, jazz, and blues. The collection also contains interviews with music producers, executives, critics, and theorists.