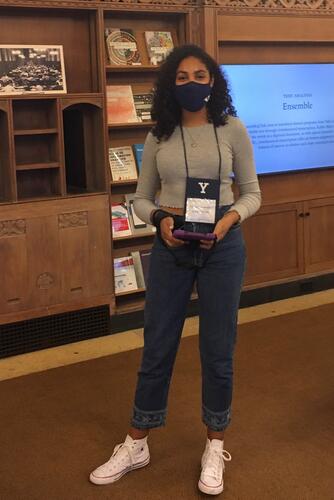 This is Caroline Pryor’s third year working at Yale Library, but it’s the first time she’s been tasked with keeping people on their best behavior.

Pryor, a senior history major in Franklin College, is one of 14 students working this fall in the newly created role of “library ambassador.” Her job is to circulate through Yale’s two largest libraries—Sterling and Bass –checking on patrons’ compliance with health and safety guidelines, and, when necessary, offering diplomatic reminders about face coverings and physical distancing.

“It hasn’t been as confrontational as I feared,” Pryor said. “People are generally following the rules. Sometimes you just need to point at the mask and then people realize that they forgot to put it back on after they took a sip of water.”

When Pryor arrives for work, she hangs an oversized Yale-branded nametag around her neck, picks up an iPad in a distinctive purple case—and goes for a walk. Over a two-hour shift, she loops through the two libraries multiple times, following a pre-mapped route through reading rooms and library stacks.

In each space, she fills out a Qualtrics survey on the iPad, recording the number of patrons present, whether they are using library materials, and how many times she has to prompt people to put on masks or move further apart. If users balk, she can text a library supervisor for backup—but so far that hasn’t been necessary.

“It gives me a good feeling to see how many people need these study spaces and to know that this ambassador program is conditional for the library staying open,” she said. “It might feel a little Big Brother-y at times, but it helps to make sure that everyone gets to enjoy the libraries.”

Because public-facing staff have other duties and responsibilities, figuring out how to monitor users’ compliance with health and safety guidelines was a critical element for library reopening, said Katy Webb, director of Bass Library. The library ambassador program was inspired by the peer health educators being used in the residential colleges, Webb said. 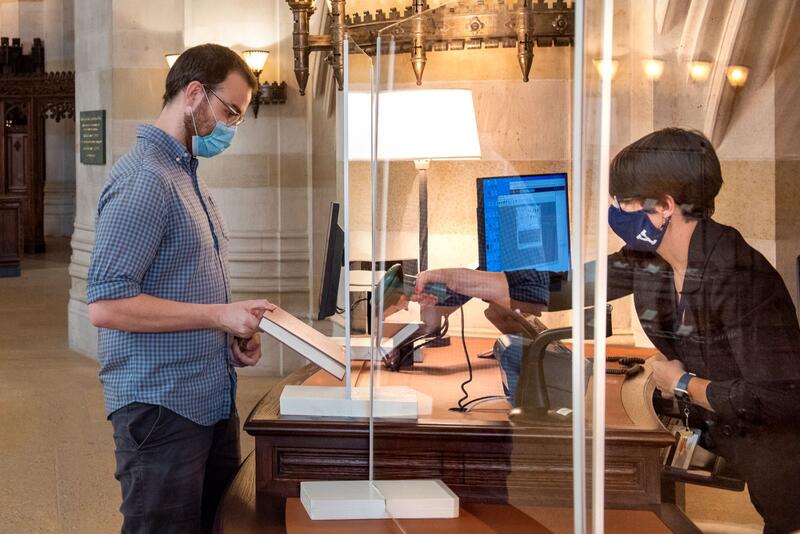 The survey data gathered by the ambassadors will help Webb and her colleagues understand how the library is being used and show any emerging shortages in study space. (So far, that has not been a problem.)

The data are also showing where more communication with users may be needed. For example, early analysis suggests that library users are most likely to remove their face coverings in individual study rooms and in the Sterling stacks because they don’t think it will have any impact on other users.

“When you’re sitting in a carrel in the stacks, you may feel completely alone, but you never know when staff shelving books or a user browsing the collection could be nearby,” Webb said. “Face coverings are also intended to reduce the risk of virus spread via library materials or other surfaces.” 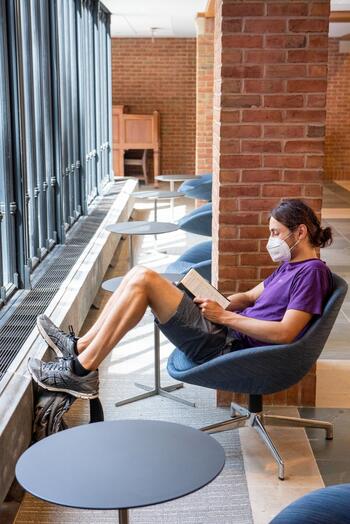 In a normal year, Yale Library is one of the largest student employers on campus, with more than 200 Yale College and graduate students employed across the library system. This year, however, health and safety requirements, including reducing occupancy of workspaces, have put many student jobs on hold, including—to Pryor’s disappointment—her former position as a student archivist for the Beinecke Rare Book and Manuscripts Library.

Pryor loved learning about the archives seeing new additions to the library’s collections as they arrived, but she’s happy to still be working in a library setting, and to know, as she puts it,  that “I’m part of a network of students helping to keep the libraries open.”

Moreover, the ambassador role has brought some unexpected benefits. “Walking around Sterling and Bass when I’m not in a study mindset allows me to notice more things,” she said. “It gives me time and space to think about how beautiful this library system is.”