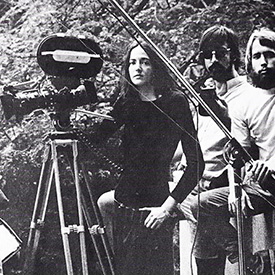 The Yale Film Archive in Sterling Memorial Library has been awarded a $17,000 grant from the National Film Preservation Foundation to preserve End of the Art World, the first film made by an undergraduate woman at Yale. Created by Alexis Krasilovsky ’71—a member of Yale’s first coed graduating class and pioneering film director and screenwriter—the 1971 film was groundbreaking in an era when women filmmakers were rare and the practice of filmmaking was yet to be embraced as an art form at Yale and in many other higher education institutions. This will be the fifteenth film preserved by the Film Archive since 2008 through grants from the foundation.

While enrolled at Yale, Krasilovsky did an independent study at the Whitney Museum in New York City. Escaping from Yale’s male-dominated environment, she came into contact with Andy Warhol, Robert Rauschenberg, Jasper Johns, Michael Snow, and many other prominent avant-garde artists. She interviewed them all in End of the Art World using a variety of 16mm cameras, including a Bolex—a legendary hand-held motion picture camera—which she purchased with money her grandmother gave her to buy clothes for Yale. She was one of the only camerapersons, male or female, allowed to film Warhol at the opening of his retrospective at the Whitney. Her unprecedented access not only revealed aspects of the artists’ lives, but also the cultural and political climate in which they worked.

What started out as Krasilovsky's senior capstone project led to a prolific filmmaking career. In 1973, her film was included in the Whitney Museum’s first festival of films by women directors, overseen by curator David Bienstock. She went on to produce many other successful films including Let Them Eat Cake, about the pleasures and perils of pastries; and Exile, set in Czechoslovakia before the fall of the Iron Curtain and shown nationally on PBS. She donated her entire film collection to Yale in 2019 and gave an in-person interview as part of the WomenAtYale150 celebration.

The original negatives of the film were lost in a laboratory so all that exists is the original 1971 16mm print. A team of film preservation experts will scan this print, frame by frame, to produce a high resolution digital copy, which will then be digitally “cleaned” to remove scratches and dirt accumulated over the years. A film recorder will convert the digital file to a new 16mm negative which can then be used to make new film prints. Audio experts will remove pops and clicks and other age-induced wear and damage from the soundtrack, and create a digital file, from which a new 16mm optical soundtrack will be created. All these elements will ultimately be combined to create new 16mm screening prints and a digital master. Brian Meacham, the Film Archive's managing archivist who will oversee the project, said he is "excited to be able to preserve and safeguard the film for future generations."

Krasilovsky, now 70, is “overjoyed to know that the film which was such a challenge for me to make at the age of twenty is being preserved and is likely to outlive me.” She credits Yale professors Murray Lerner and Jay Leyda as being among those who encouraged her to create art at a time when the art history department was almost exclusively geared towards art made by men. She is also grateful to Meacham “without whom my 16mm footage might be destined for a garage crawling with rats.”

Krasilovsky recently completed a novel which fictionalizes the entire process of making End of the Art World from its conception through its premiere. Sex and the Cyborg Goddess, published under the pseudonym Alexis Rafael, tells the tale of a young woman determined to become a filmmaker despite the obstacles.

When the preservation project is completed a year from now, researchers will be able to view the film in the archive’s brand new screening room—which has the capability to screen 16mm films—or in one of the individual viewing booths. There are also plans for a public screening of the film with an in-person Q&A to follow with Alexis Krasilovsky, Professor Charles Musser (who helped make the film), and a curator from the Yale University Art Gallery.

The Yale Film Archive, housed in a newly-renovated 3,200-square-foot space on the seventh floor of Sterling Memorial Library, offers a 23-seat screening room, customized viewing booths with clip-capture capability, video collection stacks, and a film preservation suite with cold storage. The heart of film culture on the Yale campus, it provides a passionate commitment to the preservation of—and access to—resources for the scholarly study and appreciation of cinema, and a dedication to excellence in support of teaching, learning, and research. Home to a collection of more than 7,000 films and 50,000 titles on DVD, Blu-ray, and VHS, it offers a diverse collection of 35mm and 16mm prints, with strengths in African-American cinema, newsreels, silent comedies, and documentaries. View the Yale Film Archive website.