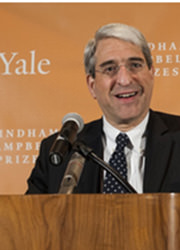 The Beinecke Rare Book & Manuscript Library has announced the winners of the 2015 Donald Windham-Sandy M. Campbell Literature Prizes at Yale. The writers, who hail from the United States, United Kingdom, Nigeria, and South Africa, were chosen confidentially in three categories — fiction, non-fiction, and drama. Honored for their literary achievements as well as their potential, the winners will each receive $150,000 to support their work.

The Windham-Campbell Prizes were established in 2013 by novelist Donald Windham and Sandy M. Campbell to call attention to literary achievement and provide writers with the opportunity to focus on their work independent of financial concerns. There is no submission process, and winners are determined by a global group of invited nominators, a jury in each category, and a selection committee.

“The Windham-Campbell Prizes were created by a writer to support other writers,” said Michael Kelleher, director of the program. “Donald Windham recognized that the most significant gift he could give to another writer was time to write. In addition to the prestige it confers, the prize gives them just that — with no strings attached."

De Waal, a British artist and author, said that winning the prize was an “extraordinary and life-changing experience.”

“I still cannot believe the news,” he said. “Writing is slow and solitary, a passage through places and ideas, that can and has taken me years. I am moved that this award was created out a love of books and to be associated with this alone, is a tremendous honor.”

South African writer Vladislavić has been “in a bit of a daze” since receiving the news that he was a recipient of prize. “It is astonishingly generous and will make a decisive difference to my writing life. Thank you for recognizing the work I’ve already done and for supporting the work I still want to do.”

“I'm shocked. And grateful. And shocked,” said U.S. playwright Drury upon hearing the news of the award. “To say this prize is life changing is an understatement. It reorders the basic realities of my personal and professional existence. It’s alchemical. It’s radically generous. I am simultaneously honored, humbled, and dumbfounded.”

In September, the winners will gather from around the world at Yale to receive their awards. The ceremony will be followed by an international literary festival celebrating their work.

For biographies and photos of the nine prizewinners, visit the Windham Campbell website.