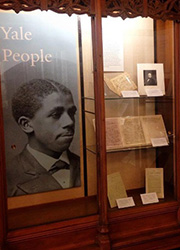 Celebrating Yale History in Manuscripts and Archives, now on view in the Sterling Memorial Library Memorabilia Room, explores fascinating details of Yale’s history through the display of primary sources available at the library.  Most compelling, however, is the exhibit’s focus on “firsts,” minority students who were the first to gain admission to or graduate from specific programs.  These students broke barriers and, through their successes, prompted larger cultural changes on the Yale campus and beyond.

Henry Roe Cloud (B.A. 1910, M.A. 1914), born in 1884 on the Winnebago Reservation, was the first full-blooded Native American to graduate from Yale College. After graduating, Cloud attended Auburn Theological Seminary and later became a Presbyterian minister.  As an official in the U.S. Office of Indian Affairs, Cloud was a champion for Progressive Era reforms and fought to expand educational and professional opportunities for Native Americans.

Louise Whitman Farnam (Ph.D 1916, M.D. 1920) was among the first women to receive a degree from the Yale School of Medicine.  In 1916, the year Farnam sought to matriculate, the medical school was willing to admit women; however, the school lacked appropriate facilities - mainly, women’s restrooms.  Farnam’s father, Yale professor Henry Walcott Farnam, agreed to “be responsible for meeting the expenses of suitable lavatory arrangements” (Farnam’s display includes the letter from Dr. Farnam to Yale president Arthur T. Hadley).  Louise Farnam earned her medical degree in 1920, and went on to practice medicine in China before settling in England.

Jasper Alston Atkins (LL.B. 1922) was the first black man to graduate from Yale Law School with honors. Throughout his illustrious career, Atkins argued numerous civil rights cases before the United States Supreme Court. He also contributed to the process of dismantling the separate-but-equal system of higher education in North Carolina.  His display includes a typed recommendation letter from the Dean of Yale Law School, which describes Atkins as “industrious,” “trustworthy,” and “a man of unusual intellectual ability.”

Sylvia Ardyn Boone (M.A. 1974, Ph.D. 1979) was the first African American woman to receive tenure at Yale. She received her Ph.D from Yale in Art History, and received the Blanshard Prize for her dissertation.  She joined the Yale faculty in 1979, and received tenure in 1988.  Popular as both a professor and a colleague, Boone taught “The Black Woman,” a ground-breaking course introduced during the initial years of coeducation at Yale College.

The exhibit explores numerous other facets of Yale’s history, including the founding of the university and the development of student life.  By focusing on several extraordinary students, however, “Celebrating Yale History in Manuscripts and Archives”  highlights how individuals can effectively and positively impact culture on the Yale campus and beyond.