The Yale Library Remembers the Legacy of Elie Wiesel 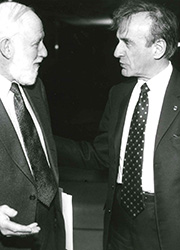 The world was saddened this past weekend to learn of the death of Nobel Laureate, Elie Wiesel. The Yale Library was honored to have had Wiesel as a member of the Honorary Board of Advisors of the Fortunoff Video Archive for Holocaust Testimonies, since its founding in 1981. The Archive is a collection of over 4,400 videotaped interviews with witnesses and survivors of the Holocaust and is part of Manuscripts and Archives, located in Sterling Memorial Library. Wiesel actively promoted the Holocaust Survivors Film Project, the New Haven grassroots project that preceded the Fortunoff Archive. He urged survivors to share their stories so they and their loved ones would not only be remembered in perpetuity, but would also provide present and future generations with the opportunity to learn about the Holocaust not only from Nazi documents, but from the victims’ perspectives as well.  The following are excerpts from Professor Wiesel’s remarks at the inauguration of the Video Archive at the Yale Library in November 1982.

“Future generations will be in your debt. No person in the world is as capable of gratitude as a survivor is, for we know that is by sheer luck that any of us is here.  We could have been elsewhere.  Nobody did anything to survive. We could have been among those who went just ten minutes before us.  We didn’t do anything then. But then we tried to do whatever we can to justify our being here.  We believe that every moment is a moment of grace and therefore every word must be an offering, and therefore every story must contain a secret which we try to share with as many of you, with all of you, as possible… a story of anguish, humiliation, and death.  We still ask ourselves whenever we meet, whether in words or in silence, why? Why Majdanek, and why Belsen, and why Treblinka?  Why? We read, and we read, and we read, and we shall go on reading till the end of our lives and we shall not understand why one million Jewish children.  Why? …I was there and I still don’t understand.  But our duty has not been to understand, simply to remember. …Whenever survivors were asked for so many years to tell the story, every one of them would say only one sentence:  “You won’t understand.  You won’t understand.”  …We want so much to be understood.  That is why we speak.  …We want so much to try and give you what we feel is the essential part of our being, a fragment of a fire that will prevent the world from knowing another fire.  Therefore this project is so important.  … what they have seen, nobody will see, and nobody should ever see.  Listen to them…  Listen to their stories.  Listen to their words and also to their silences.  For every word they say, there are a hundred that remain unsaid.  …They are witnesses, and therefore, you must listen to them, and listen with all your heart and all your soul.  …Listen to them and listen to them well.”

Elie Wiesel spoke at several subsequent Fortunoff Archive conferences and events and was the Chubb Fellow lecturer at Yale in December 2006.  Our heartfelt condolences go to Elie Wiesel’s family.