Yale Library to Receive Award for Internships and Outreach

Yale University Library has been selected to receive the first annual Ivy Award from New Haven Promise, a program that provides scholarships and career development support to graduates of New Haven schools. The award, which will be presented at the group’s annual Scholar Celebration on Aug. 16,  recognizes the library’s strong support of the group’s career launch and civic engagement initiatives.

“In the last year, Yale University Library has strengthened its commitment by hiring eleven paid interns in 2018,” wrote New Haven Promise President Patricia Melton in her notification letter. “However, it is more than increasing your financial commitment—opening the doors of the Beinecke Rare Book and Manuscript Library to the city and the treasures that the entire Yale University Library system possesses is generous and valued by all in the Elm City. Because of your involvement and dedication, our organization, our internship program, and the greater New Haven community have prospered and continued to flourish.”

The eleven Yale University Library interns are working in Library Information Technology, the Center for Science and Social Science Research, the Stat Lab, Assessment and User Experience, and the Beinecke Rare Book and Manuscript Library. Two more Promise interns are working in the library of the Yale Center for British Art and one in the Lillian Goldman Law Library. All together, Yale libraries are hosting fourteen of the ninety-eight Promise interns at Yale this summer.

“We are honored by this award, which reflects the commitment of many library staff to serve as supervisors, mentors and colleagues to the interns,” said Susan Gibbons, the Stephen F. Gates ’68 University Librarian, who recently hosted the students for breakfast.  “This program is a priority for the library because we want to give back to New Haven, but I also hope that some of the interns may become interested in library careers through this experience and become our librarian colleagues in the not-too-distant future.”

The internships are particularly valuable because they introduce students to many technologies that are foundational to the library’s work, Melton said.  “Our scholars are digital natives who begin their internships with adequate or basic technology skills, and the library helps them get to the next level,” she said. “They can and are applying these skills back in college, which sets them apart from their peers.” 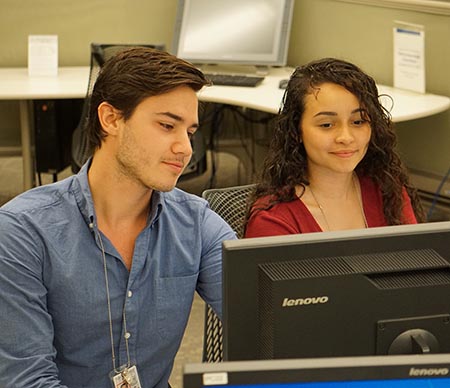 Shirley-Ann Feliciano and Sam Smith (pictured here) have been interning with Geographic Information Systems (GIS) Librarian Miriam Olivares in the library’s Center for Science and Social Science Information. The two students have been creating and updating instructional videos used to teach GIS, sophisticated data mapping software that can be used to analyze, manipulate, and present any geographical data. On July 31, they presented an introductory GIS workshop for eighteen of their peers, and in early August they helped Olivarez teach GIS workshops for New Haven middle-school and high-school students.

Feliciano was familiar with GIS from her studies at the University of New Haven, where she earned her bachelor’s degree in criminal justice with a concentration in crime analysis. The summer’s experience has deepened her understanding of the versatile software as well as video production techniques. Smith, a pre-med student majoring in math and chemistry at the University of Miami, had never heard of GIS before this summer. Now, he sees the enormous potential for GIS applications such as analyzing and predicting the spread of disease. The internship “has opened up a whole new world of possibilities,” he said.

Interns also gain experience and insights that are about more than technology. At the Beinecke Library, Dante Haughton and Tubyez Cropper (pictured below, with Haughton at right) have spent the summer assisting Communications Director Mike Morand by producing short videos highlighting events, exhibits, and the work of the Beinecke’s research fellows.  Shared on social media, the videos have received thousands of views, attracting local visitors to the library while also expanding virtual access for more distant audiences. “It’s been phenomenal to have Dante and Tubyez here,” Morand said. “They quickly became an integral part of our team. They came up with great ideas and then they did a great job executing them.”

Haughton, a rising senior and English major at Skidmore College, said he has particularly enjoyed seeing original historical materials up close and talking with researchers about their work.  The experience has increased his understanding and appreciation of the Beinecke’s unique role. “I am grateful for the time we have been able to spend with some of this summer's researchers,” he said. 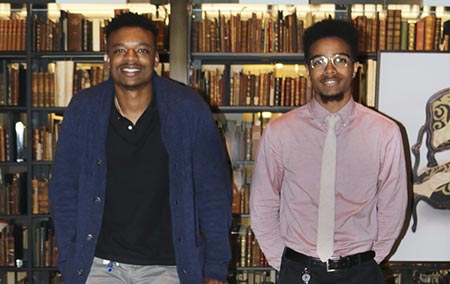 The two interns have also helped organize public events, including the July 18 commemoration of Nelson Mandela’s hundredth birthday and the July 5 public reading of the Declaration of Independence and Frederick Douglass’s 1852 oration, now known as “What to a Slave is the Fourth of July?”

Cropper, who graduated in May from Franklin and Marshall College, was the opening reader for the Douglass oration. “There was definitely a great response from the audience,” he said.  “I heard a lot of laughs and gasps as they realized how a lot of the content back then was still existent in today’s society… It made my day to see so many people take interest in such a historic event in our nation's timeline.”

Claudia Schatz, a rising senior at Wesleyan University, has been interning in the Beinecke’s technical services department, where her work has included digital preservation of floppy disks and re-housing photographs from the Western Americana Collection. But for Schatz, a French studies major and art history minor who studied in Paris last year, the most memorable project has sorting and processing the voluminous correspondence of French artist Maurice Bismuth-Lemaître to make it more accessible to researchers, a task for which her French language skills have been essential. “There are often moments of ambiguity where the content becomes relevant,” she said. “For example, when letters are clipped together, I may need to read them to evaluate why and whether they should be kept together.”

Her sense of the work changed in early July when the 92-year-old artist died. “Since he can no longer speak for himself, his collection and this work we are doing will have to speak for him,” she said. “That makes archival processing feel urgent and important.”

These are the 14 New Haven Promise Scholars interning at Yale libraries this summer: