Gates Classroom artwork celebrates the history of the printed word

Last year’s top-to-bottom renovation of the Manuscripts and Archives space in Sterling Memorial Library got a vivid finishing touch this summer with the installation in the new Gates Classroom of Chords: Text (After Gutenberg), created by Richard Townsend Rose, a Yale College lecturer, critic in the School of Art, and master printer in the Jonathan Edwards College Press. Rose (pictured with the work) was inspired by the library’s Gothic architecture, the room’s origins as an exhibition space for Yale’s copy of the Gutenberg Bible, and Johannes Gutenberg’s invention of the earliest form of movable type.

The Gutenberg Bible, a 1926 gift to Yale from Mrs. Mary Harkness, was displayed in the space, then called the Grand Exhibition Room, from the library’s opening in 1931 until 1963, when the Bible was moved to the newly constructed Beinecke Rare Book and Manuscript Library.

The room features soaring painted ceilings, carved woodwork and a marble fireplace, and lofty wrought iron gates bearing the inscription, “There is no past so long as books shall live.” Read about the origins of the quote and more about the history of the room. 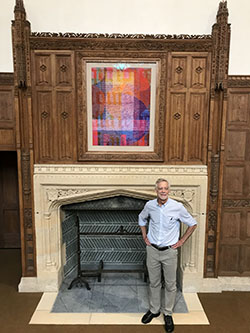 “This work was commissioned specifically for the Sterling Memorial Library’s renovated Gates Classroom. My initial research began with study of the interior architecture, and the extensive use of ornament. Sterling’s architect, James Gamble Rogers, created the soaring spaces, inspired by the richness of Gothic structure and detail. Throughout the library one finds mimetic homages to the history of the book, to language, to great works of scholarship, and to the graphic arts. The Gates Classroom, as I learned, originally housed Yale’s copy of the Gutenberg Bible (c. 1455), known also as the forty-two line Bible, now displayed at the Beinecke. This prime masterpiece of print is also a monument of civilization, viewed by scholars as a catalyst of literacy via the printed word. Johannes Gutenberg’s movable type, textura, known more generally as “blackletter,” is the earliest form of European movable type, and was created to mimic the manuscript writing of his time. The deeply imprinted black of his crisp letterforms intrigues bibliophiles, as it still sparkles on the page.

In creating this artwork I wanted to allude to the library’s architecture, the room’s history, and by extension, to Gutenberg’s transcendent achievement. Beginning with digital scans of selected text passages, I experimented with layering, using transparent hues as a means of building color harmonies and pictorial depth. The layers were then woven together within a network of strands to create optical mixtures that change with one’s viewing perspective. As the process continued, I realized that vibrant color and asymmetry could offset the surrounding woodwork to good advantage. The final version was completed only after making numerous printed proofs; a different technology here, but a tradition that Johannes Gutenberg would surely have recognized.