The Irving S. Gilmore Music Library has completed an eighteen-month project to digitize and stream online a collection of early, rarely heard performances of works composed by Charles Ives.

The project provides extraordinary new global access to the work of one of the pre-eminent composers of the twentieth century and the first American composer to gain international recognition. Four hundred thirty-six recorded performances of Ives’s compositions can now be streamed online by anyone connected to the Yale University network. A subset of the recordings can be streamed beyond the Yale network, anywhere in the world.

The newly digitized performances span approximately 335 hours and comprise the Charles Ives Rare and Non-Commercial Sound Recording Collection (MSS 14 HSR), part of the library’s Historical Sound Recordings unit. With funding from the Grammy Museum, digital recordings were produced from fragile acetate disks (some with glass cores), open reel tapes, and other legacy recording media on which the original performances were captured.

The significance and quality of the recordings, coupled with their long-term preservation and expanded access, make this project a landmark for scholars of music. It will be of particular interest to contemporary artists preparing to perform Ives’s works. “These recordings offer performers extraordinary insights into how the works of Ives have been interpreted over the past eighty years or so,” said Jonathan Manton, music librarian for digital and access services. 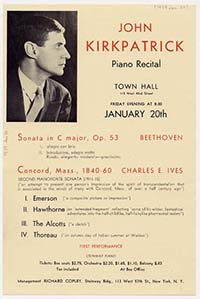 In addition to preserving the performances, Yale University Library secured the legal rights to make a subset of the recordings globally available for the first time.  They all include one of Ives’s most significant works, his Piano Sonata No. 2, "Concord, Mass, 1840-1860,” performed by the noted Ives scholar John Kirkpatrick, later curator of the Ives Archive at Yale. The recordings capture six Kirkpatrick performances at different stages of his career. They include the world premiere at New York Town Hall on January 20, 1939; the first radio broadcasts on WABC in New York on March 24 and 31, 1939; and a performance at Yale University in 1969. The 1939 performances are the earliest known complete recordings of the sonata, and they predate the ﬁrst commercial recording—also by Kirkpatrick—by nine years. “Kirkpatrick was the foremost interpreter of Ives’s work,” Manton said. “These recordings allow us to trace how his interpretation of the Concord Sonata evolved throughout his career.”

Researchers and the general public may live-stream the newly accessible recordings from anywhere in the world using these links:

The full collection is available to the Yale community and to researchers and visitors connected to the Yale network. 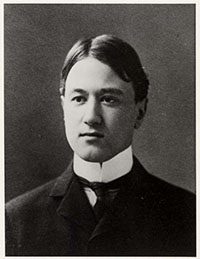 Charles Ives was born in Danbury, Conn., in 1874 and studied music at Yale. After his graduation in 1898, he worked in the insurance industry for 30 years, composing music in his free time. Later in life, he gained recognition, including a Pulitzer Prize in 1947. However, it wasn’t until after his death in 1954 that his true genius became widely known.